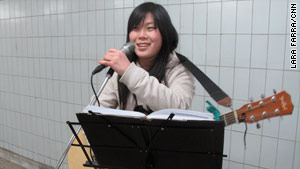 Ren Yueli is on the verge of stardom after pedestrians filmed her performing in a Beijing subway station.
STORY HIGHLIGHTS

Beijing, China (CNN) -- No one would have ever known about the homemade submarine Tao Xiangli was testing in a reservoir just outside Beijing if a passerby had not filmed it and posted the video online.

The footage was an instant hit. And Tao, an amateur inventor who works as a technician in a karaoke bar, was instantly a star.

"I never thought I would become famous in China because this kind of activity is considered crazy," Tao said.

There are countless others here like Tao who are turning into overnight sensations on Chinese video-sharing Web sites like Youku.com and Tudou.com.

The portals are becoming repositories for pent-up creativity that otherwise might go unnoticed in a country where state-controlled media offers few channels for artistic expression outside the mainstream.

"It is an unleashing of creativity like the world has never seen," Thomas Crampton, Asia-Pacific director of 360 Digital Influence, a blog of the Ogilvy Public Relations firm, said. "It is a very exciting time."

While the bulk of the content on popular Chinese video sites consists of domestic and foreign movies and television programs, a growing share of material is coming from Chinese who are picking up cameras, filming the world around them and sharing it with others for the very first time.

This may not seem extraordinary elsewhere, yet the growth of user-generated content represents a major shift in the way China watches itself and the way the world watches China.

"You have gone from a situation of no channel to a situation where there is this much more open channel."
--Thomas Crampton, media analyst

"This is a fundamental shift in China's media scene. There is now the ability for people to share their interests and their talents. You have gone from a situation of no channel to a situation where there is this much more open channel," Crampton said.

"People are demonstrating their homemade airplanes and these sorts of things. It is allowing creative expression on multiple levels that has never been there before," Crampton told CNN.

"Before for somebody who was highly creative, that creativity would not get beyond their own town and now it can reach the world."

Quirky inventors aren't the only ones finding fame online.

Ren Yueli is now on the verge of stardom after pedestrians filmed the 21-year-old performing in a Beijing subway station and shared the clips on the Internet. The videos have been viewed over 3 million times.

Ren sang in the station for four years, sending most of the money she collected back to her disabled parents in the nearby province of Hebei. She is now working on signing a record contract and makes regular appearances on local TV shows.

Aspiring actors, filmmakers and animators are also uploading their work.

Kang Guanxu, for example, produced a six minute animated film that has been viewed more than 400,000 times on Youku.com. The movie, titled "Talk to Another Me," raises awareness for disabled children and the loneliness experienced by a generation raised in single-child families.

"It is a story that strikes a chord with people," said Kang, a 23-year-old who just lost his job at an advertising company in Beijing.

Part of the mass appeal of Kang's work and other similar productions is the subject matter the films address. While there are still limits to what can go on the Internet in China, online video producers often find innovative ways to discuss sensitive themes that would never have the chance of airing in the mainstream media here.

A 64-minute animated movie titled The War of Internet Addiction is one example. The film, using footage from virtual game World of Warcraft, criticizes Internet censorship in China among other themes. Since it was posted on Youku.com on January 21, more than 10 million have watched.

"Online, people can express their ideas more freely," said Yi Zhenxing, 26, a civil engineer in the southern province of Hunan who produces comedic films for the web. "The Internet is an honest recorder of social reality."

Yi, who wears a garish mask in his videos to conceal his identity, produced a 23-part series incorporating action figures and other imaginative characters to metaphorically discuss political issues and other current events. Two million people have watched the clips on Tudou.com.

Advertisers have taken notice. Many of Yi's videos include short commercials for shampoo and other products. While Yi collects a small share of the revenue generated from ad sales, he said he is not concerned about making money from his work, which will remain just a hobby for now.

Yet for online video producers who hope to make a career from their online films, it remains unclear whether their success on the Internet will ever materialize into anything substantial offline.

Video-sharing Web sites, like Youku.com, have established partnerships with traditional media outlets, encouraging them to utilize the grassroots talent emerging on the site.

The company is also working on creating its own original productions, which would be at least partly developed by amateur filmmakers discovered on the Internet. It also pays top-performing video producers for their films and holds an annual awards ceremony for the most popular content creators.

"While the Chinese video culture is developing, we are talking about a country with a population of 1.3 billion people. So there are a lot of interesting people and a lot of interesting events that are happening at this phase of history in China," said Victor Koo, founder or Youku.com.

"We are working with different partners to put these stories and these people onto television programs. Traditional media are very interested," he said.

Youku.com declined to disclose revenues it earns from user-generated content. Other video sites are finding it more difficult to attract advertisers and interest from broadcasters and film studios.

"The biggest problem is timing," Liu Yan, founder of the video sharing site 6Rooms (6.cn), said. "Even though a video may have a huge number of hits, it is very hard to generate revenue."

Like Youku.com, 6Rooms also pays its most popular contributors to continue to put their content on its site.

Liu said it is something he will continue to do while he waits for advertisers and traditional media to become fully aware of the deepening talent pool that is emerging online.

"It is a gamble," Liu said. "But you never worry about those people giving up. Their energy and enthusiasm will sustain them."