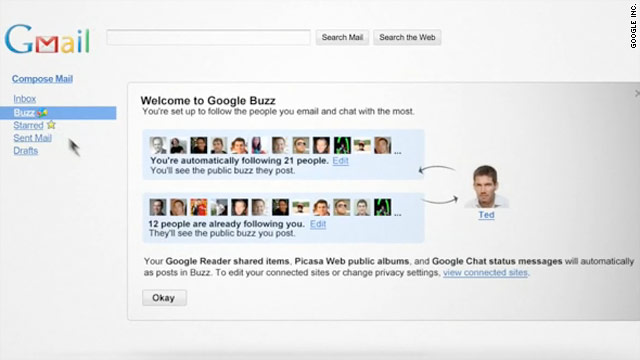 (CNN) -- Google plunged into the world of social networking on Tuesday, melding pieces of Facebook and Twitter into a new feature, Google Buzz.

Buzz, which will work through the popular Gmail service, will allow users to post status updates, photos and links to members of their network -- as well as pull in their activity on other sites like Twitter, Flickr and Picasa.

Google spokesman Bradley Horowitz said the service, which was rolling out to some Gmail users Tuesday afternoon and should be available to all in the next couple of days, aims to weed out what he called the clutter of other networking sites.

With networking sites, "there's obviously value there," he said. "It's a phenomenon that's real, but it's increasingly becoming harder and harder to make sense and find the signal in the noise."

By letting users post photos, links and updates openly, the tool would mimic Twitter's micro-blogging format. But users also will be able to make their content available to "friends only," more closely following the Facebook model.

At an event at the company's Mountain View, California, headquarters, Google also seemed poised to take a poke at the AOL Instant Messenger service, saying Buzz will be offered to companies as a tool for interoffice communication.

"It will change the way businesses communicate around the world," Horowitz said.

Despite the inevitable comparisons, Google spokesmen said they didn't set out to tread on anyone else's turf.

"We try not to pay too much attention to competitors," Gmail product manager Todd Jackson said. "We try to listen to users."

Horowitz said Google Buzz will automatically make "friends" out of the people a user e-mails or chats with the most on Gmail.

See CNNmoney's report on reaction from some Google competitors.

Comments on posts will appear in real time. And comments by other users will be weighted, similar to how Google's search engine weighs results, to "collapse bad buzz and recommend the good buzz," Jackson said.

The hands-down leader in the search engine world, Google has been branching out on projects that include its Nexus One smartphone, the company's first foray into hardware marketing.

Late last month, Google announced that people could tweak their accounts to make results related to friends, co-workers and other members of their social networks appear above all other results.

The Social Search feature was introduced to a limited number of Google users last year and was made available to everyone in beta status on January 28.

The change came with a hint of more things to come.

"This is just a first step in our ongoing effort to ensure that Google Web search is always as social as the Web itself," the company said in an instructional video posted to its official blog.

Google Buzz probably won't be able to bring in status updates and other materials from Facebook for the same reason that Social Search doesn't.

Because most Facebook users set their information to be viewed only by friends, Google's search engine can't collect that information in the same way it can from Twitter and, obviously, Google-owned sites like YouTube.

Buzz also will have a mobile component, operating on most major wireless operating systems with features that include voice-recognition posting and a GPS-enabled ability to attach the user's location to posts.

The Web-based mobile application, which can be used by iPhones despite not going through Apple's online store, can also be set to pick up posts to Buzz being made near the user's location.

Changes to the tool could be coming quickly, too. Google officials say they're already studying possible expansions. They include allowing Buzz updates by phone, letting users post to their Twitter account through the tool and linking Buzz with the still-emerging Google Wave system.

"We're just getting started," Horowitz said. "We're not launching this today because we think we're done. We don't think that's how a product like this is built."