Apple iPad: 'Oversized iPhone' for some, 'iVolutionary' for others 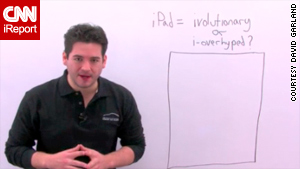 (CNN) -- Kyle Aevermann of Seattle, Washington, is a young, tech-savvy, Apple product-consuming kind of guy. Despite his love of his iPhone and everything else "i," the iReporter says he won't be picking up an iPad.

"I think this is kind of a waste right now, especially for people who already have iPhones and iPod Touches, because it does the same things."

After Apple's announcement of the new iPad on Wednesday, tech fans and average folks alike are debating its merits. iReporters joined the conversation about the tablet device, addressing everything from its features to the controversy over its name to its place in a world of shrinking devices.

Aevermann says many people he knows, as well as his tech-loving Twitter friends, were not all too excited about the iPad. He wondered what was new about it, as well as why Apple would put out a bigger device when so many companies are trying to make smaller ones.

Looking for a reason to buy an iPad

He says the iPad has potential as an e-reader, especially for people tired of carrying around lots of hardcovers.

"I think this would be great for high school. You can put your textbooks on it."

I think this would be great for high school. You can put your textbooks on it.
--Kyle Aevermann, iReporter
RELATED TOPICS

The speaker and entrepreneur says he is excited about the potential for the device to allow publishers to put out better content and, more importantly, paid content via iTunes.

He said he hopes the iBooks e-reader application will facilitate buying and then reading books on the iPad. He thinks this, in combination with iPhone apps and a nice-sized screen, will help position the device to compete with the Kindle.

In particular, he said, wireless capability and the potential to buy an AT&T 3G data plan would give the iPad an edge over the Kindle. With all these features put together, Garland says, people will be able to access publishers' content and have a better experience. He also says the device will allow publishers to display rich-media advertisements.

He said he thinks a "Napster phenomenon" may take over, referring to music service Napster's evolution from a place once used to pirate content to a source of paid music and other products. iTunes devotees may transfer their love of buying music online to buying books and other things.

"iTunes is going to prove here that people will pay for content even thought they expect it free."

"I do love the iBook concept; it's probably the strongest selling point. But honestly, if you had stuck a mini camera on this baby and given us video call conferencing with optional Bluetooth headset, I would have been one of the first to turn my iPhone into an iPaperweight."

'Maybe my expectations are too high'

Walford said he hoped software makers were on the ball with making software and apps for the device, particularly makers of graphic design products. He also fretted about Flash capabilities on the iPad, saying not allowing Flash will limit its use.

Flash is a software component that helps computers display video, animation and interactive interfaces. Some Web sites require Flash in order to be used properly.

"As much as I love my iPhone, [Flash] is a small detail that leaves a big hole in our relationship."

Adriana Maxwell of Marietta, Georgia, says her immediate impression of the iPad was its name, which stirred an Internet uproar as bloggers joked about how the device reminded them of feminine hygiene products.

"Needless to say as soon as that name hit the Twitter world, the jokes ran abundantly. I have to admit some of them were very funny. However, I was seriously curious if Steve Jobs actually consulted any of his female co-workers to make the determination as to whether this is the kind of name you want on your latest, greatest project."

Maxwell said she loves the iPad's features, with or without the super-absorbent connotations, and would love play with one of the devices. She wondered if one could connect with a MacBook.

Gary Berman of Atlanta, Georgia, also said he really liked the iPad's features and added that the rumors about the iPad were "pretty much on the mark." His only point of contention is the lack of a camera.

"It's basically an oversized iPhone," he said, adding that he liked the functionality and thought it was a device with a lot of features. He liked the capacity to compete with the Kindle and added that the iPhone isn't the be-all of small devices.

"Surfing the net on my iPhone is OK, but it's not great, since it is such a small screen. Since it has a nice 10-inch screen, I'm sure the surfing experience is much better."

Berman also said he wasn't convinced that existing netbooks were that great, and said he thought the iPad was "much better" than current options in its size class. He did question whether a price range from $499 to $829 for a full version of the device was worthwhile when full MacBooks are priced similarly.

Bottom line, he said, the iPad seemed like a product that would hold appeal for some but might be hard to justify buying for many.

"It's definitely a niche product. There's no killer app on this product that would make me run out and buy this product. Most of the things I do with my iPhone I'm happy with."