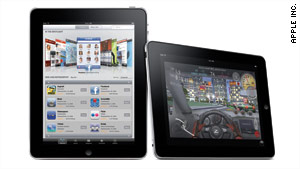 Some female bloggers wonder if any women were on Apple's iPad team.
STORY HIGHLIGHTS

San Francisco, California (CNN) -- Punch lines about hygiene products flooded the blogosphere on Wednesday only moments after Apple Inc. announced it would call its new touch-screen computer the "iPad."

"The mocking goes along the lines of: Yes, the iPad is small, lightweight and slim. But can you swim with it?" wrote the Los Angeles Times' tech blog.

The term iTampon -- a riff on the fact that the iPad can be taken to sound more like a maxipad than a slick new computer -- was the third most-talked about trend on Twitter on Wednesday evening.

Do you think the iPad name is a flop?

Some female bloggers wrote that Apple seemed not to have any women on its marketing team.

"With "iTampon" quickly emerging as a trending Twitter topic, it's probably safe to say that many women found themselves cringing as they asked, 'Do any women work at Apple?' " wrote Annie Colbert on the blog "Holy Kaw!"

The tech community has discussed the name for Apple's new keyboard-less computer for months if not years. Rumor had it that the device might be called the iSlate, but one reporter at Apple's San Francisco event joked that the term "slate" might sound too ancient or heavy for a lightweight lap computer.

Video: When can you get the iPad?

Video: Will iPad save old media?

"Slate is a little bit 'Flintstones,' " said Stephen Hutcheon, an editor at The Sydney Morning Herald, a newspaper in Australia.

It's also unclear what people should call the category of computers that now includes the iPad. Some refer to computers without keyboards and with touch-screens as "slate computers."

Others call them tablets, a term that also can refer to '90s devices with keyboards and pens attached.

After Apple unveiled the iPad at an invitation-only event, some tech journalists said they thought the jokes about feminine hygiene would dissipate soon.

The name "iPod" sounded strange at first, for example, and now is a part of the standard vocabulary, said Hutcheon.

"If you think of iPods in 2001, we probably got the same smirks," he said. "I think the jokes will disappear."

He added that one could take "pad" to mean "home," which is where Apple CEO Steve Jobs hopes many people will use the iPad to read books, watch movies and the like.

Andy Ihnatko, a tech columnist at the Chicago Sun-Times, said Apple could call its new gadget a "mangled baby duck" and people would still buy it, both because Apple has sex appeal and because the iPad is a good product.

"With the right device, marketing doesn't really matter," he said.

The name iPad sticks with Apple's "i" line of branding and is therefore a smart move, said Jacqui Cheng, a senior writer at the tech site Ars Technica.

Still, the torrent of online jokes about the iPad could stick in consumers' minds. It seems particularly damaging that MADtv was making fun of the iPad name long before Apple ever introduced its new product.

A years-old comedy skit from the show circulated the Internet on Wednesday. It shows two women discussing an Apple period-maintenance device called the iPad.

"Will women send their husbands to the Apple store to buy iPads?" the user wrote.