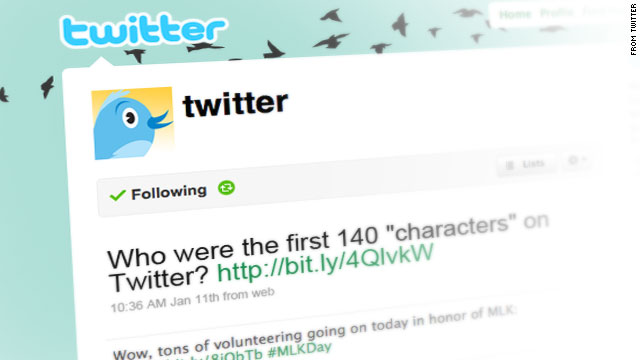 Twitter's number of users has flattened out, but analysts say current users are more loyal and active.
STORY HIGHLIGHTS

(CNN) -- It was the upstart rock star of the Internet in early 2009, roaring out of relative obscurity to become one of the most exposed -- some would say overexposed -- services on the Web.

But since the middle of last year, the number of Twitter users has flatlined.

Compete, a Web analytics firm, says the microblogging site's number of visitors hasn't changed much since June and that its roughly 22 million visitors in December was about 770,000 fewer than its highest number, which was in August.

Multiple other analysts paint the same picture, raising the question: Has Twitter peaked?

"Maybe Twitter was a victim of its own success," said Andrew Lipsman, an analyst at comScore, another company that tracks traffic on Internet sites. "It grew so quickly that it isn't meeting its own expectations."

But the company and some analysts say that this leveling of popularity shouldn't be viewed as a failure, because the people who use Twitter are using it more than ever.

ComScore's usage numbers for Twitter are similar to Compete's. They show the site peak with about 21.2 million visitors in July 2009 and dip to 19.9 million in December. By contrast, during the same period Facebook grew from about 250 million users to more than 350 million.

After several months of double-digit growth, traffic to Twitter.com skyrocketed in March, increasing by 131 percent in just one month.

That was the sharpest spike in a growth boom during which, according to comScore, the site went from about 2.6 million visitors at the beginning of January 2009 to 17 million by the end of April.

"I was really floored when I was watching those numbers come out," Lipsman said. "I've never seen anything close to that in the natural growth curve of a site."

Interest was piqued after celebrities, athletes and other high-profile users signed on early last year, sharing their thoughts with the world in 140-character snippets.

But with that came what political pundits call "soft support," people who may have checked out the site a few times and decided it wasn't for them.

Mark Logan, vice president of Kansas City, Missouri-based Barkley Marketing, said his Twitter use tailed off as the site got bigger.

"I don't know whether Twitter itself has peaked, but my own usage of Twitter is definitely in a slump," said Logan.

He said that, compared to the site's early days, when he used it primarily as a professional tool, there's too much chatter he's not interested in now.

"The signal-to-noise ratio seems too low," said Logan. "In the early days of Twitter, the conversation was centered around digital marketing topics and technology. It's much broader now."

But in a "tweet" from his account earlier this month, after reports of Twitter's flatlining began appearing on technology blogs, CEO Evan Williams was bullish.

"Across all metrics that matter, yesterday was Twitter's highest-usage day ever. (And today will be bigger.)," he wrote on the evening of January 12, the day of the earthquake in Haiti.

Analysts are finding statistics that may back up that claim, at least in part. They say current Twitter users are more engaged with the site than ever.

According to Web analysts HubSpot, average users now have more followers (300, compared to about 70 in July) follow more feeds (170, compared to 45 in July) and have sent more tweets (420 during the life of their account, compared to 120 in July).

The site also is becoming more international. Less than 51 percent of Twitter users were from the United States in December, compared to more than 61 percent in June.

Others have suggested that Twitter's user base only appears to have flattened because more people are using mobile devices and third-party programs like TweetDeck to post to the site. But Lipsman believes most of those people still visit the site at least once a month, which should register in site-traffic analysis.

Lipsman said he expects Twitter's growth to kick back up, if at a much slower rate than before. He said he'd only be alarmed if the site's user numbers stayed flat for several more months.

"It's easy to only look at what it's done lately," he said. "[But] you can almost imagine, what if Twitter had just grown at a more steady rate over the past months? You'd see that as a very strong growth trajectory.

"There's been a strengthening of the user base which can help it reach that critical mass where it will continue to trend upward over time."