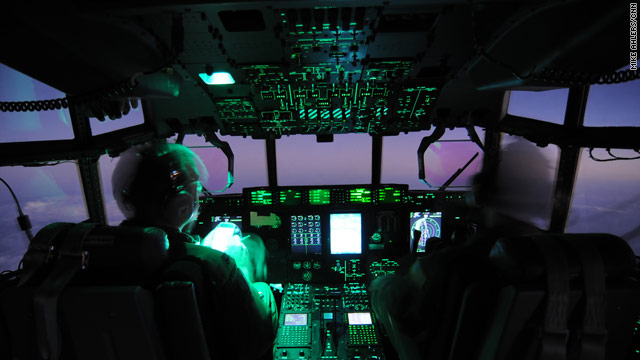 This is Commando Solo, a radio station in the sky. The long wire, kept vertical by a 500-pound lead weight, is helping transmit an AM radio signal to the people of Haiti. Four other antenna on the wings and fuselage are sending FM signals.

The U.S. government is using Commando Solo to deliver news and information to the survivors of the January 12 earthquake. During much of the day, the plane relays live broadcasts of Voice of America news call-in shows in Creole, the native tongue of Haiti.

During lulls in the VOA programming, it sends pre-recorded public service announcements, including advice on sanitation, what to do when encountering a dead body, and a warning from the Haitian government not to attempt dangerous and illegal ocean crossings to Florida in small boats.

iReporter shares view of Haiti from the sky

None of the 10-member crew aboard Commander Solo speaks Creole. But the technician who monitors the broadcast says he nonetheless can get a sense of the impact of the quake.

"You can hear in people's voices a lot of emotion, sometimes a little bit of frustration, sometimes really anxiety," said Brian. (The Air Force asked CNN to identify crew members only by first name and rank.)

"We hear a lot of people calling in trying to check in with their relatives and find out where they're at. And so it's pretty interesting just to hear it, even though I don't understand the language, the message really does come through," he said.

Haiti's missing and found | Are you there?

Commando Solo, part of the Pennsylvania Air National Guard, has engaged in special operations in Afghanistan, Iraq and other trouble spots around the world. The Haiti mission is a rare mission focused on humanitarian relief.

"I feel it's a very important mission. I feel very proud that we're a part of it," said Brian.

"I'm honored to be here. I mean anything we can do to actually help these people, I'm glad to do."

To insure that their message is being received, the Department of Defense has handed out tens of thousands of portable radios in Haiti. The radios are both solar and hand-crank operated, and don't need batteries.

Kathy, a first lieutenant and the mission control chief on the flight, says the plane is an effective way to communicate with the public in disasters.

"Anyone can turn on a radio, tune it up," she said. "We're able to reach all of Haiti right now with our message."

One of those messages is a dire warning from Raymond Joseph, Haiti's ambassador to the United States.

"Listen, don't rush on boats to leave the country," Joseph says in Creole. "If you do that, we'll all have even worse problems. Because I'll be honest with you: If you think you will reach the U.S. and all the doors will be wide open to you, that's not at all the case.

"And they will intercept you right on the water and send you back home where you came from."

U.S. Coast Guard spokesman Lt. Cmdr. Christopher O'Neil said there is no evidence of people fleeing Haiti for Florida, and officials do not expect a mass migration. Previous mass migrations were caused by geopolitical turmoil, not by natural disasters, O'Neil said.

In addition, there is a large U.S. government presence on the ground in Haiti, on the water, and in the air -- which is likely to deter migrants, authorities say.

Commando Solo is part of that presence.

Altogether, the Pennsylvania guard unit has three Commando Solo planes, two of which are deployed to the Haiti mission.

During the first week of operation, missions lasted about eight hours, but the flights have since been lengthened to 14 hours, allowing 10 hours a day of broadcast time. The flights are so long it requires aerial refueling of the plane.

The airplane flew an estimated 3,200 miles on Saturday, most of it in a loop above Haitian waters.

Commando Solo crew members say they are uncertain how long they will continue operations in Haiti. Several commercial radio stations damaged by the quake have resumed operations.

But they say their efforts are worthwhile.

"When people think of the military they think about going out, blowing things up, destroying," said Barry. "We're at the other end of it. We are there to assist people, to help people, to save people."