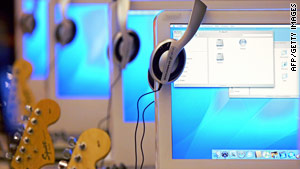 Apple's managers haven't revealed many details about their plans but did discuss offering iTunes users a means to store copies of their music libraries on Apple's servers.

The benefits to an iTunes user would include the ability to back up music and access songs off the Web from any Internet-connected device and conceivably from anywhere in the world.

Apple's song downloads apparently aren't affected. Apple has told some music executives that they see the streaming feature as a "value add" that could help stimulate download sales. Apple indicated in talks that the streaming service could be ready to roll out as soon as this spring.

It's unlikely but not impossible that Apple will announce the streaming service at a planned January 27 press event, where Steve Jobs & Co. are widely expected to unveil a new tablet device.

Apple hasn't disclosed the details of the plan yet to the four big recording companies, according to sources with knowledge of the discussions. To offer this kind of streaming service -- even if it is to store and distribute music already purchased by a consumer -- my sources said Apple may be required to negotiate new agreements with the labels.

Apple piqued the curiosity of iTunes fans last month when it acquired Lala, a struggling streaming music service. Since then, plenty of people have guessed that Apple was planning to use Lala and its managers to help stream music and possibly video as well.

Michael Roberton, the founder of MP3.com and one of the tech sector's best-known agitators, caused more speculation Tuesday when he wrote at TechCrunch: "Apple plans to upgrade their users almost over night to a cloud music service in an ambitious move to beat Amazon and others." He cited unnamed music industry sources.

Robertson told me Wednesday that many people involved in digital music believe Apple is vulnerable when it comes to cloud computing. Streaming content is considered by many to be the next wave in digital entertainment, and Apple hasn't had much of a profile in this area.

In the past two years, consumers have shown they like streaming music. Pandora, the 10-year-old streaming radio service, last week announced it had recorded its first profitable quarter.

Robertson said he expects to see an "upload" button on iTunes as part of a future update.

Still, Robertson contends an iTunes streaming plan could be problematic for the music industry. There's a possibility that Apple may not believe it must compensate or even acquire new licenses to stream legally purchased songs to owners, Robertson said.

As the largest music retailer in the world, Apple has the kind of muscle to launch the service without asking for permission, according to Robertson.

"I've talked to one of the labels guys about this," Robertson said during our interview. "The person said the labels aren't very happy, but they aren't sure Apple won't try to jam this through regardless of what the labels want. Apple can say, 'We're selling 2 billion songs and this is what we're doing.'"

On the issue of whether iTunes needs licenses to stream legally purchased music, Robertson has some experience. He is fighting a copyright lawsuit filed two years ago by EMI Music against his streaming-music service, MP3tunes.com.

EMI argues that MP3tunes doesn't have authorization to exploit the company's music this way. Robertson counters that there's nothing illegal about storing and streaming someone's legally purchased songs. His case should come to some conclusion later this year.

Another possible conflict between Apple and the labels could come when Apple's streaming service begins to harm subscription music services, Robertson said.

If Apple is allowed to stream music to a user anywhere in the world, why would anyone pay $8 a month for a subscription? I pointed out that subscription services also offer all-you-can-eat music. Robertson said that by and large, the most important songs to music fans are those they already own.

"An iTunes streaming service could close the window of opportunity for the labels to create a new type of subscription service," Robertson said.

Maybe so, but two music industry insiders told me the kind of acrimonious relationship between Apple and the labels described by Robertson doesn't exist. The two sides have had a decent give-and-take relationship for years. A move by Apple to force streaming music down the throats of the record companies would be out of character and not in Apple's interest, they said.

Another reason that Robertson's prediction doesn't ring true to some in the music industry is that the labels won't necessarily require added compensation for a streaming service, my sources indicated. They say it's a little hard to for anyone to assess that since Apple hasn't disclosed its plans.

One thing that Robertson and music insiders can agree on: Apple has its heads in the cloud.