Blippy tells the world what you buy 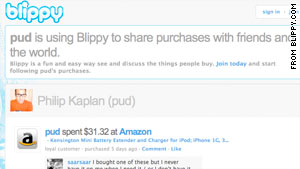 (CNN) -- In Philip Kaplan's world, no credit card purchase is private -- not even the $70.06 "sexy gift" he bought from a gay-themed shop called "Does Your Mother Know." He posted that transaction online.

Kaplan is the co-founder of a new site called Blippy. On the site, which launched last week, people enter their credit card information and Blippy automatically sends out short, public "blips" of information about what people are buying -- including the prices of the items and where they were bought.

It's like the financial version of Twitter, and Kaplan, the 34-year-old author of the book and former blog "F'd Companies," who looks and talks somewhat like the actor Seth Rogen, says it's going to change the way people think about privacy and money.

While people now may be hesitant to talk about what they pay in rent or how much they spend on coffee, Kaplan says all purchases may soon be public.

But what's the benefit? And what are the dangers? I caught up with Kaplan by phone this week to talk about how Blippy could become a new form of advertising and why no purchase -- even revealing ones -- should be embarrassing to share.

Here is an edited transcript of our chat:

CNN: Maybe we should just start with a question from one of our Twitter followers: What's the point of Blippy?

Kaplan: Without getting too philosophical, I'll just start at the beginning. The big answer is: We don't know, which I think is funny but is also indicative of what we're trying to do.

It wasn't actually me who came up with the idea. It was my co-founders Ashvin Kumar and Chris Estreich. ... The question that Ash and Chris asked themselves was: "Well, what would happen if data that is traditionally private, like credit card data, becomes public?" Or another way to ask it is, "What happens if everybody knew what everybody else was paying for everything?"

Consumers have never had the benefit of just knowing how much everyone else has paid for stuff. When I go down to the local gym in my neighborhood and I say I want a membership and they tell me how much a membership costs, I have no idea what an actual membership costs. I don't know if I should ask for less, or if they're giving me a deal. I kind of just want to know what everybody else there is paying. But of course the gym will never tell me that.

CNN: For someone who hasn't heard of Blippy, if they go to the site, how does it work? Are the posts automatic? Can you post manually?

Currently it's automatic. Typically what people do is they connect one credit card to Blippy, and then the rest of your credit cards are private. So when you buy something that you think is vaguely interesting -- it could be from a restaurant that you are at, or, you know, getting a bagel for lunch, or literally just buying gas, something that's not private -- you use your shared card, your Blippy card, and it's automatically shared with your friends.

We personally like that. We call it passive sharing, and we think it's going to be a trend. You don't have to go to Twitter or Facebook and type to tell everybody what you're doing. You just sort of do your normal stuff and you're automatically publishing. That said, you can always pause the sharing if you're buying birthday gifts or something like that.

CNN: Why does the price have to be attached to the posts?

In a way, Blippy is like looking at a menu, you know. And if you have a menu without prices, like the first thing you want to know is "How much does it cost?"

I saw that one of the people who I followed bought this scale on Amazon. It said: Wi-Fi enabled bathroom scale; $169. Now that's not cheap for a bath scale, but "Wi-Fi enabled" sold me, so I bought it. And when I bought it, somebody else bought it because they saw I bought it. When they bought it, like three other people bought it. It was the first time I'd ever seen viral shopping. It's like a little flair went out and suddenly probably 10 people bought these scales within an hour, which was a lot of scales, and 10 more sales than they would have sold.

CNN: Is there the potential for anything bad to happen from all of this sharing of credit card information?

The way that we say it is, the worst thing that could happen is you're totally boring. There are people on the site who all they do is buy gas and groceries. Maybe that doesn't look great for them, you know. They should go to a restaurant or a bar or something.

I bought a bunch of holiday gifts for my wife on Blippy and they all showed up on Blippy ... She was like, "Oh my god, I love you. Thank you!" It was fine! You know. It was a new way to give a present, in a way.

CNN: Is there any potential that this would expose someone to an attack on their financial information, or that it could be used against them?

I don't -- we've all been taught that this is just something you don't do. As an aside, when I was a kid, we weren't allowed to tell anybody we were going out of town, and we had timers in the house that would turn the lights on and off so it would look like we were home.

But now you tweet when you're at dinner. ... You put your whole schedule on Facebook so people can like plan their robberies ahead of time. And I think the pros far outweigh the cons in that scenario. ... I think the risks in actuality are very small.

Similarly, I think we have this engrained thing that we're taught, which is to not share this [financial] information, and we don't really know why.

CNN: Are the companies and sites you integrate with paying you? [People can choose to have their Netflix downloads posted, for instance, without entering credit card info].

No, they're not paying. What they're doing is they're encouraging their users to use us. Which is kind of a ballsy move, because what if nobody buys anything from these stores, or what if people buy things from the stores and they don't like it? So far it's been stores that think that they sell cool stuff, and think they sell good products, and they say, "You know what? When somebody buys this, we want them to tell the world."

CNN: Do you think this promotes brand names that everyone knows and national chains?

It's hard to tell. The site's only been open for a few days. ... For me, and I presume for most people, the things that you haven't heard of are the most interesting. So while, yes, it's fun to look at what somebody bought from Target, and a lot of people buy stuff from Target, it's more fun to see that I bought something from a store called "See Jane Run."

CNN: What are your personal limits in using the site? Do you post everything?

I post everything except places that only take cash, and that bums me out. And if you're a store and you only take cash you're opting out of free advertising on Blippy.

I used to have two credit cards, one that was connected and one that wasn't connected. And it's not like I'm mister squeaky-clean and everything I buy is fit for public consumption, but I just realized that I wasn't really using the private credit card for anything. And I liked that credit card, so I connected them both.

So I went to that store and I bought a sexy gift for my wife, and of course it showed up on the site. And it was funny! I didn't really care.

CNN: You mentioned the idea of a Blippy Card. Is Blippy going to become a credit card company over time?

There has been some demand for an actual Blippy Card. If someone only has one card and they want like a big orange card that they're not going to forget is their Blippy card.

So we have a few solutions. It could be as silly as just a sticker you could put on your card to remind you. ... We might have a credit card. We're at the very beginning stages of looking into it.