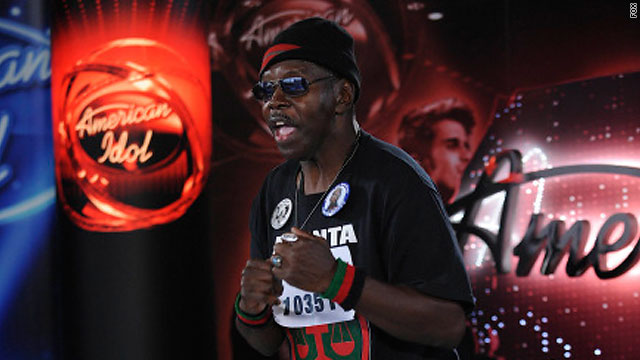 "Pants on the Ground" has more than 1 million Facebook fans and about 5 million views on YouTube in less than a week.
STORY HIGHLIGHTS

"Pants on the Ground," an atonal and repetitive condemnation of baggy jeans by "General" Larry Platt of Atlanta, Georgia, capped last Wednesday's episode of "American Idol."

And in less than a week, it's earning buzz worth online status that could one day rival such famous, if artistically questionable, offerings as "Numa Numa" and "Chocolate Rain."

The performance has hit the two magic millions of online fame -- more than 1 million fans on Facebook and 1 million-plus views on YouTube.

As of Tuesday afternoon, several versions of "Pants on the Ground" had together tallied somewhere around 5 million clicks on YouTube. The most popular had more than 1.8 million views, and another had about 1.5 million.

Adam Ostrow, editor of the social-media blog Mashable, on Tuesday declared "Pants" to be "the year's first mega viral hit" -- even as dozens rushed to record remixes of it, including one using the guitar riff from Joan Jett's "I Love Rock 'n' Roll."

The tune caught the attention of late-night comedian Jimmy Fallon, who performed the song while impersonating rock legend Neil Young, and even Minnesota Vikings quarterback Brett Favre -- who chanted the song's chorus with teammates to celebrate a playoff win Sunday.

Platt told CNN last week that he'd seen some of the other versions of his song on YouTube and he liked them.

I have a horrible feeling that song could be a hit.
--"American Idol" judge Simon Cowell

The buzz was all but predicted by "American Idol's"
Simon Cowell, the savvy music-industry maven who launched last year's viral darling -- Susan Boyle from "Britain's Got Talent."

"I have a horrible feeling that song could be a hit ...," Cowell said on the show after telling Platt that his age made him ineligible to advance in the competition. "I don't think this is going to be the last we hear about you."

But Platt still has a long way to go to catch up with Boyle -- who surprised viewers, if not show producers, by following an awkward introduction with a powerhouse vocal performance.

Boyle was far and away the most watched performer on YouTube last year, with more than 120 million views, according to the site.