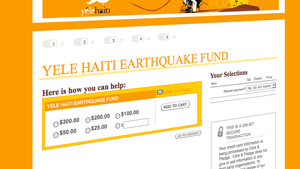 (CNN) -- Web surfers looking for information on the earthquake in Haiti scoured the White House's blog, the Red Cross' site and a handful of Twitter feeds, according to Internet traffic data gathered Wednesday by CNN.

Also popular were reports on a variety of news sites, including CNN.com, about victims being pulled from the rubble in Port-au-Prince. Readers also flocked to stories about the collapse of a United Nations office building and inmates escaping after a Haitian prison crumbled.

On Wednesday morning, the most visited site was the official White House blog that detailed when President Obama was informed of the earthquake and what he was told about "key decisions that have been made, and actions that have already been taken."

By Wednesday afternoon, however, users were clicking instead on news reports about The Rev. Pat Robertson saying Haitians were cursed because they once "swore a pact to the devil" and conservative radio host Rush Limbaugh discussing Haiti in political terms.

At midday Wednesday, four of the top 10 Twitter topics were on Haiti or earthquake relief. Many people retweeted news reports and details on how to send small donations to Red Cross relief efforts by texting codes via cell phones.

The flood of attention appeared to overwhelm the Web site of Yele Haiti, a Haitian relief organization founded by musician Wyclef Jean, who was born in the ravaged country.

Eleven of the top 20 topics on Google Trends Wednesday afternoon also were Haiti- or earthquake-related, showing the disaster was captivating much of the wired world -- although plenty of people also were searching for news about Heidi Montag of "The Hills" discussing plastic surgery.