Google vs. China: Free speech, finances or both? 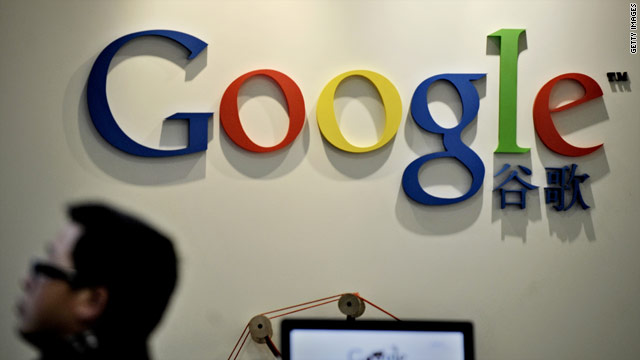 A man walks past the Google Chinese logo at the company's office in Shanghai, China, on Wednesday.
STORY HIGHLIGHTS

(CNN) -- Google's announcement that China should either stop censoring Internet searches or risk a pullout by the search-engine giant rocked the online world Wednesday, leaving observers to break down the meaning of the provocative move.

By standing up to the communist regime, Google fashioned itself a champion of free speech -- a mantle the California-based company has wrapped itself in, even as its decision to allow only limited results in China drew criticism.

But while many applauded Google's bold stance, others questioned whether finances may have had as much to do with its move as freedoms.

Google said Tuesday that the company and at least 20 others were victims of a "highly sophisticated and targeted attack" originating in China in mid-December, evidently to gain access to the e-mail accounts of Chinese human rights activists.

A Google spokesman said intellectual property was stolen in the attack, while declining specifically to say what kind. But the company said the attacker or attackers gained access to the header -- or subject-line information -- from the e-mails of two human rights activists through the Google network.

The contents of the e-mails were not accessed, the spokesman said.

As a result, the company said, it is no longer willing to abide by the filters that the Chinese government demanded on certain searches before allowing Google to operate in the country.

"We'd like to talk to the government about the ability to operate an unfiltered search engine in China, and that would be our preferred outcome," Google chief legal officer David Drummond said in an interview Tuesday with CNN. "However if that's not possible, then we'll have to consider other alternatives which could include shutting down the local site or even closing down our offices entirely."

Google officials acknowledge that since it started operating in China in 2006, thousands of search terms have been censored there. Within hours of Tuesday night's announcement, Google.cn was retrieving results for sensitive topics, including the 1989 crackdown at Tiananmen Square, the Dalai Lama and the banned Falun Gong spiritual movement in China.

Google's decision to filter itself in China in the first place was likely the most controversial in the history of the search-engine leader -- whose stock in trade is unfettered access to information and whose unofficial slogan is "Don't be evil."

"It's a move that, in the past, has been highly criticized," said Rhea Drysdale, who handles search-engine issues for Internet marketing company Outspoken Media. "As a search marketer myself, it's not something that we've really agreed with."

Google has argued that moving into China allowed Chinese users at least limited access to information. Workarounds by savvy Chinese users, particularly political dissidents, have at times found loopholes in the site's filters.

"But what I think we've seen is that the environment in China on the Internet has gotten more restrictive, not less restrictive."

We just no longer in good conscience can continue to censor our results.
--Google legal officer David Drummond

Standing up to China, Drysdale said, buys Google lots of goodwill in the online community. The company had taken some heat online after CEO Eric Schmidt, in an interview with CNBC, defended Google's practices of gathering information in the wake of complaints about privacy.

"When Eric made that comment, it shook a lot of confidence in Google," Drysdale said. "Now, actually coming out and saying that they're not going to allow censorship to happen anymore in Chinese search results is a very strong stance. And I think it restores a lot of faith."

Others were wondering if there wasn't more to the story though.

"Everything seems to be extremely positive -- everyone is waving their hands in the air and saying, 'Go Google! It's a blow for human rights,' " Eaton told CNN. "But no one has really analyzed why."

For one thing, Google has not managed to dominate the search-engine market in China as it has in the rest of the world.

Beijing-based Baidu was claiming it had 77 percent of the market share in that country in the third quarter of last year, according to Fortune magazine, with Google pulling about 19 percent.

"I think we'd be daft to think that someone or other, some finance guys, haven't sat down and looked at the financial situation in China and said, 'You know what? This isn't going to work out,' " Eaton said.

By reacting to the Chinese hacking incident -- which Google says it has tightened security to prevent -- the company can save face while doing something it was considering anyway, he said.

"Pulling out of China may be a way to score a huge PR hit," Eaton said. "It looks good if Google, say, looks for some sort of government regulation approval inside the States in the future."

But Danny Sullivan, editor in chief of the Search Engine Land blog, said that Google was making good money in China and was steadily growing its share of the market.

He called suggestions that Google is considering pulling out of China because of money "cynical," saying that the mobile phone market was opening up for its Android operating system and that studies show Google has been earning more, per search, than Baidu.

"I think they were more successful than people are giving them credit for," Sullivan said. "They were not such losers that they decided, 'We better get out and here's a good excuse.' "

For its part, the Chinese government said Wednesday that it welcomes foreign Web-based enterprises and is working "to promote sound development of the Internet."

"The Internet in China is open," said Xi Yanchun, a Chinese Embassy spokesman. "It is illegal to assault the Internet. China [welcomes] foreign Internet enterprises to do business legally in China."

In the English-language version of the state-run Xinhua news, a Chinese official highlighted the 700 Chinese jobs that would be lost if Google pulled out.

Xinhua quoted Guo Ke, a communications professor at Shanghai International Studies University, saying it would be "almost impossible" for Google to quit China and that the government would never back down on censorship.

"It will not make any difference to the government if Google quits China; however, Google will suffer a huge economic loss from leaving the Chinese market," Guo said, according to Xinhua. "Chinese Internet users are the real victims if Google quits China. I think Google is just playing cat and mouse, and trying to use netizens' anger or disappointment as leverage."

The final result, Drummond told CNN, will be up to the Chinese.

"[W]e just no longer in good conscience can continue to censor our results," he said. "And so it's kind of up to the Chinese government as to whether they want to work with us in a way that will allow us to be there on that basis."

That stance, Sullivan said, is the sort of brash approach that industry analysts have come to expect.

"That actually felt very Google-like," he said. "It's the kind of thing they would do."