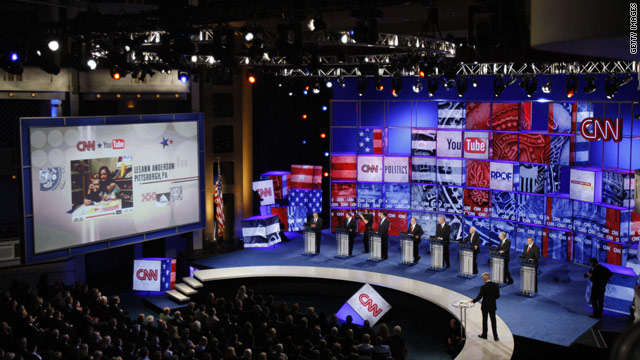 (CNN) -- As a California court prepares to wade once again into the thorny issue of same-sex marriage, a side debate has developed over the role of online media in the courts.

The federal judge who is hearing appeals of California's Proposition 8 this week ruled that the proceedings could be shown -- albeit in delayed fashion -- on YouTube.

With the U.S. Supreme Court considering the legality of the plan, backers say the videos would give the world a chance to hear and see unfiltered arguments in a way they never could before.

Opponents, meanwhile, say the big stage of the world's most popular video sharing site would open up participants in the case to harassment and make footage from the case easy to edit and distort.

It's a new sort of debate, swirling around how new technology intersects with the nation's judicial system.

But Paul Levinson, a professor of media studies at Fordham University, calls it "a traditional and very deep-rooted historical dilemma."

"On the one hand, when you put up the gate and allow for the maximum information, that's very good, but it also comes with the risk that some of the information will be falsified and distorted," said Levinson, whose 2009 book "New New Media" examines the effect of online media on culture.

"There's no way of doing this that has no risk. It's a question of which risk you want to take for which benefits."

Last week, U.S. District Court Judge Vaughn Walker ruled that the Proposition 8 hearings in his court would be fed live to other rooms in the courthouse, then posted by his staff to YouTube several hours later. But opponents of same-sex marriage -- which Proposition 8 outlawed -- appealed, and the U.S. Supreme Court on Monday asked that the plan be postponed until it rules on whether it is legal.

Opponents said witness testimony could be affected if cameras were present. It is rare for a federal trial to be televised.

The Supreme Court's stay allows distribution only to other rooms in the San Francisco courthouse.

In blog posts last week for the conservative National Review Online, Ed Whelan, a former law clerk for Supreme Court Justice Antonin Scalia, wrote that the videos threaten to turn the hearings into a circus.

"Posting on YouTube would, of course, in turn make it easy for anyone to splice and dice the video, post highlights, overlay the video with text or special effects, and make alterations," he wrote.

"Posting on YouTube, in other words, creates the possibility that any particular excerpt of any witness' testimony or any counsel's statement could 'go viral.' "

There's no way of doing this that has no risk -- it's a question of which risk you want to take for which benefits.
--Media studies professor Paul Levinson

He also argued the public nature of testimony and arguments "ensure that the potential for abuse and harassment of witnesses and other trial participants is thousands, if not millions, of times greater than an ordinary unrecorded trial would entail."

Jon Davidson, legal director of the pro-gay rights Lambda Legal, disagreed, saying opponents of same-sex marriage in California want to keep the hearings as quiet as possible to avoid public debate on the legal merits of the case.

"One of the things we find on the marriage issue, but really on all issues in response to gay rights, is that the more discussion there is -- the more conversation, the more people learn -- the more likely it is that gay people are going to do well," Davidson said.

Davidson said posting the trial on YouTube wouldn't increase the potential for witnesses to be harassed, saying that anyone can read news reports after the fact to find out who spoke and what they said.

Besides, any effort to block new-media coverage of the hearings is already too late, Davidson said. He said people in the courtroom for opening arguments Monday were posting live updates to Twitter throughout.

The issue once again places YouTube at the heart of political discourse.

During the 2008 presidential election, YouTube partnered with CNN on a pair of debates, both streaming the debates live and asking users to submit video questions that were played during the debates.

The White House and Congress both have YouTube channels, police post surveillance video of crimes and state, local and federal officials routinely use the site to post information to their constituents.

Even Queen Elizabeth II has gotten in on the act, posting her annual Christmas greeting to her subjects and other official appearances by the royal family on "The Royal Channel."

"When it comes to opening up government proceedings to people on a global scale, YouTube offers an unprecedented reach," said Steve Grove, YouTube's director of news and politics.

Grove said YouTube and other forms of online social media make government accessible to people who may not otherwise become engaged.

He said the most popular video from the 2008 presidential election was President Obama's speech on race -- a 37-minute speech that originally aired on a weekday morning when most people probably couldn't see it live.

"You look at the power of social networks and YouTube to engage citizens ... the barrier to entry becomes a lot lower," Grove said. "Commenting on a YouTube video can become political commentary."

Levinson, who said he supports the California court proceedings being posted, acknowledged the possibility that YouTube users could take footage of the hearings and alter it to either suit their own beliefs or merely embarrass the speaker.

But he said freedom of information is worth that risk.

The Supreme Court is expected to rule on the issue by Wednesday.