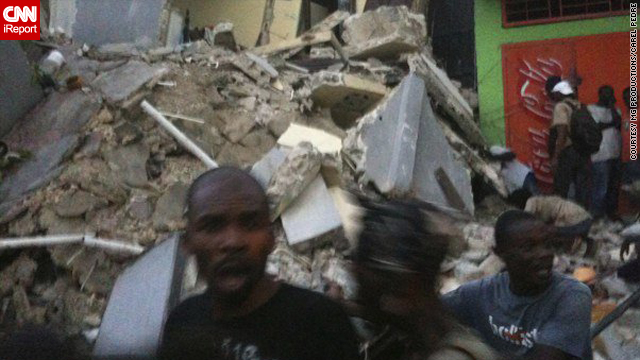 (CNN) -- CNN is monitoring tweets and other messages from people in Haiti and reports from those who said they have been in touch with friends and family. CNN has not been able to able to verify this material.

What people on the ground in Haiti are saying on Twitter:

Watch Luke's interview with a Haitian student after quake

"Just experienced a MAJOR earthquake here in Port au Prince - walls were falling down. - we are ALL fine - pray for those in the slums" -- From Twitter user troylivesay in Port-au-Prince, Haiti at 5:24 p.m. ET

"words on the streets part of Hotel Montana Fell , exagone is cracked. houses in canape vert fell down #haiti #eq" -- From Twitter user fredodupoux in Haiti at 6:05 p.m. ET

"In touch again with my friend, a new aftershock just happen, lot of emotions... #Haiti #HaitiQuake" -- From Twitter user InternetHaiti in Port-au-Prince, Haiti at 6:15 p.m. ET

"Phones and internet are mostly out - we don't have either at home - radio says the Palace fell down and buildings fell down all along Delmas" -- From Twitter user troylivesay in Port-au-Prince, Haiti, at 7:28 p.m. ET

"I can't imagine the devastation this has caused to such an overly stressed city - I think it will be suffering for quite some time" -- From Twitter user troylivesay in Port-au-Prince, Haiti, at 7:31 p.m. ET

iReport.com: Are you there? Send photos, stories

"If anyone in Haiti is reading this, please go out and help in the streets, it's very ug;y out there if you haven't seen it #haiti" --From Twitter user fredodupoux in Haiti at 8:04 p.m. ET

"In our area mostly exterior walls fallen - people afraid to re-enter their homes..." -- From Twitter user troylivesay in Port-au-Prince, Haiti, at 8:20 p.m. ET

"Tipap made it home from Carrefour - saw many dead bodies and injured along the way - said most buidings w/more than one story are down" -- From Twitter user troylivesay in Port-au-Prince, Haiti, at 8:22 p.m. ET

"I'm hearing singing and praying from from the carrefour feuilles area.. My prayers go out to the folks there" -- From Twitter user RAMhaiti in Haiti at 9:26 p.m. ET

"just saw a picture of the palace..it is destroyed" -- From Twitter user RAMhaiti in Haiti at 10:05 p.m. ET

"I'm told things aren't good at [Hotel] Montana.. an 8 story building behind me is rubble" --From Twitter user RAMhaiti in Haiti at 10:20 p.m. ET

"its crazy. we can here people wailing and crying. we know a lot of big buildings have fallen. we watched the mountain above the orphanage split. i have never experienced anything like this before. all of the nannies and kids are sitting out in the middle of our compound. a neighbor has already come over for medical help. i don't have words to express." -- Commentor relating details from sister-in-law in Jacmel, Haiti on the south coast at the Hands and Feet Mission/Children's Village.

"Just got news that one of nannies,Francines school in Jacmel fell. She is injured but prayfor her. Many of her classmates are dead! She is at her moms house next door tonight. We also heardthat thehospital in Petionville (PAP) also collasped." -- Commentor Drex Stuart of the Hands & Feet Mission in Jacmel, Haiti.

"My brother and I were able to speak to our mother right before the communication went down. The house had collapse and she was outside in the front yard on her cell phone. She described total destruction around her" -- Commentor on CNN story

"Hello I live in Santiago Dominican Republic , The haiti earthquake was felt as if the epicenter was located in Dom Rep. I was lying on my bed and everything started shaking , frames and loose items around my home fell all over the place. A building which serves as a hospital for children with severe burns collapsed and they are currently trying to remove debris and victims from the building. I also have friends who work and haiti and the last thing I heard is that the hotel located near petion ville where they stay at collapsed and are trying to rescue victims as well." -- Commentor on CNN story