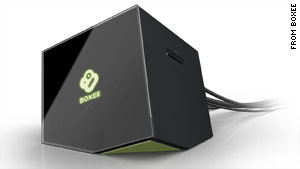 The Boxee Brown, a cube-like device that shares Internet content with your TV, is scheduled to go on sale this spring.
STORY HIGHLIGHTS
RELATED TOPICS

The box narrowly beat out Plastic Logic's Que e-reader and the Intel Reader, a device that scans printed text and reads it aloud, in the annual product-demonstration contest, which is decided by audience applause.

The Boxee Box plugs into your TV and allows you to search and store Web content, play it on your television and and share it with your friends on social networks via a keyboard in the device's remote control. The device is scheduled to go on sale this spring and cost about $200.

"It's truly a game-changer," said Boxee marketing vice president Andrew Kippen, who presented the device. "We're really bringing the creativity of the Web onto your TV screen."

The ninth annual "Last Gadget Standing" event pits 10 new products against each other in a lighthearted, "American Idol"-like competition for tech gear. Past winners have included the OnStar vehicle security system, the Roomba robotic vacuum and Eye-Fi wireless memory cards for cameras.

The 10 finalists, all on display at CES, were chosen beforehand by a panel of judges.

Company reps were given four minutes to demonstrate their products before a standing-room-only crowd. The freewheeling demos included a Dr. Evil character from the "Austin Powers" movies plugging a pocket projector and a "Star Wars"-inspired skit in which a Jedi knight battled Darth Vader over a smartphone.

Tech geeks who couldn't attend the contest in person were encouraged to vote online. The online winner was the SHOW WX Pico Projector, a portable projector that's the size of a cell phone and can display a Power-Point presentation anywhere.

Neato Vacuum Cleaner, a robotic vacuum with a square jaw for getting into corners and a mapping system that prevents it from wandering aimlessly.

Intel Reader, a handheld device that scans text, converts text to voice and reads it aloud -- a potential aid to the dyslexic or vision-impaired

Nvidia Ultra Android Tablet, which packs a gaming PC and a multimedia player into the body of a portable tablet less than an inch thick.