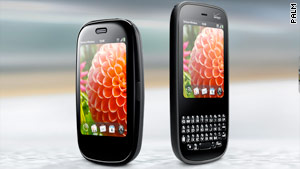 The upgraded Pre and Pixi smartphones have an app that creates a personal Wi-Fi cloud.
STORY HIGHLIGHTS
RELATED TOPICS

(CNN) -- Palm on Thursday announced upgraded versions of its Pre and Pixi smartphones that add video recording and the capability to create 3G mobile hotspots for laptops and other mobile devices.

The Pre Plus and its cousin, the thinner Pixi Plus, will go on sale January 25 and will be available only on Verizon's wireless network. That's a blow to Sprint, which currently is the exclusive U.S. carrier for Palm's phones.

Prices of the phones were not announced during Palm's press event here at the 2010 International Consumer Electronics Show.

The phones' most significant new feature may their new mobile hotspot, an app that runs on Palm's webOS operating system and that can be downloaded -- as part of a Verizon data plan -- beginning January 25 from the Palm App Catalog.

Palm says the application will give customers the option of creating a personal Wi-Fi cloud capable of sharing Verizon's 3G network with up to five Wi-Fi-enabled devices.

The Palm Pre Plus and Pixi Plus will be the first cell phones in the world to offer this capability, Palm CEO Jon Rubinstein told reporters during the invitation-only, hour-long event.

The new phones will allow users to record videos and e-mail or upload them almost immediately to YouTube or Facebook. The phones also will have a Flash 10 browser plug-in that will allow them to, say, play movie trailers on Yahoo's site.

After six months of private beta testing, Palm on Thursday also opened its developer program to outside developers interested in creating apps for its phones. Palm's online store currently has more than 1,000 mobile applications, well behind the 100,000-plus applications available in Apple's better-known App Store.

"If you can imagine it, we're going to give you the tools and the access to build it," said Katie Mitic, Palm senior vice president of product marketing.

Palm introduced its Pre phone, largely viewed as a success, to much fanfare at last year's CES. The phone hit the market in June 2009, followed in November by the thinner, less expensive Pixi.