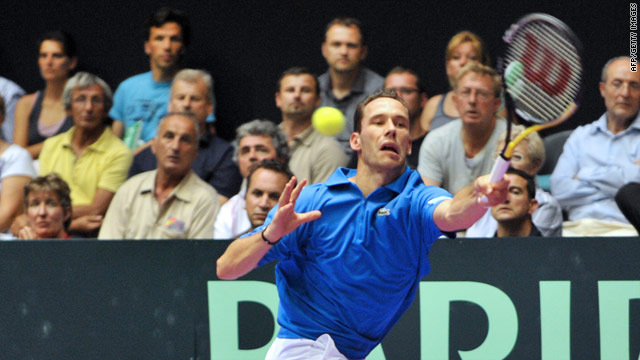 (CNN) -- France knocked defending champions Spain out of the Davis Cup in their quarterfinal match at Clermont Ferrand on Saturday.

The French team sealed victory -- their first over their neighbors since 1923 -- and a place in the semifinals after the doubles pairing of Michael Llodra and Julien Benneteau beat Fernando Verdasco and Feliciano Lopez 6-1 6-2 6-7 7-6.

The win gave the French an unassailable 3-0 lead in the best-of-five rubber contest.

Verdasco and Lopez, despite their impressive Davis Cup record playing together, couldn't keep Spain on track for a third successive title.

The French pair took the first two sets of the match easily and looked as though they would complete a straight sets victory in quick time, but Lopez and Verdasco took the third to a tie-break which they won. But they couldn't repeat the trick in the fourth set losing the tie-break 7-5.

Spain were without Rafael Nadal -- who is recuperating after winning the Wimbledon title last weekend -- and surrendered the opening two rubbers on Friday with David Ferrer and Fernando Verdasco losing to Gael Monfils and Michael Llodra respectively.

France, who last won the Davis Cup in 2001, will face either Russia or Argentina in the semifinal.

Argentina take a 2-1 lead into Sunday's reverse singles matches after the pairing of Eduardo Schwank and Horacio Zeballos defeated Nikolay Davydenko and Igor Kunitsyn 7-6 6-4 6-7 6-1 in Moscow on Saturday.

The match went with serve until the ninth game of the first set when the Russians managed to break Schwank's service game.

But the advantage was short-lived as the Argentine pair broke back immediately on Davydenko's serve to force a tie break which they went on to win.

The Russian pair fought back in the third set which they won on a tie-break and it looked as though they were going to take the match to five sets when they broke the Argentine's serve in the opening game of the fourth set.

But Zeballos and Schwank fought back impressively breaking the Russians on three consecutive occasions and wrap the set up 6-1 and take the match.

Afterwards, Davydenko lamented his own form coming into the tie.

"Today I experienced similar problems to the ones I did yesterday. I'm still far from my best form. I was making too many unforced mistakes especially from the base line," Davydenko said, AFP reported.

"Our pair looked very impressive today. They recently won the Pan American Games and I believe they have a bright future," Vasquez said, AFP reported.

On the other side of the draw, Serbia edged closer to a semifinal spot against the Czech Republic after their doubles pairing of Nenad Zimonjic and Janko Tipsarevic beat Croatia's Marin Cilic and Ivan Dodig 6-3 6-2 6-4 in Split.

Cilic and Dodig's had a chance to extend the match in the third set when they broke serve, but the Serb pair repaired the break and then secured one themselves and duly took the set and the match.

The win gives them a 2-1 lead going into Sunday's singles matches.

The Czech Republic took an unassailable 3-0 lead against Chile on Saturday as Jan Hajek and Lukas Dlouhy defeated Jorge Aguilar and Nicolas Massu 7-6(7-3) 6-3 3-6 6-3 in Coquimbo.

The visitors moved into the last four of the competition for the second year in a row, having led 2-0 on Friday as Hajek and Ivo Minar beat Paul Capdeville and Massu respectively.