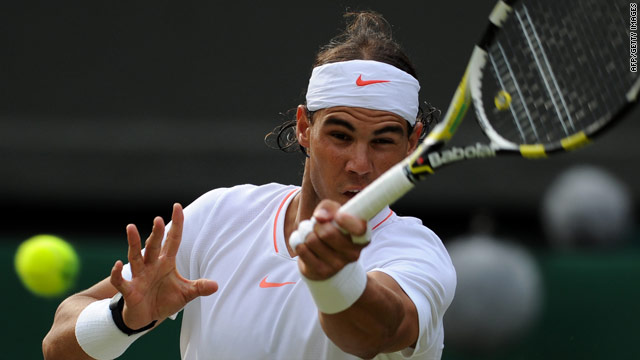 Number two seed, Rafael Nadal beat Robin Hasse on Centre Court, but not before experiencing a mid-match wobble. Dutchman Hasse took the French Open champion to five sets, and at one stage led the Spaniard two sets to one.

"I knew before the match that he is a very good player. In the first set I was trying my best on the return but I couldn't do anything," Nadal said, reported AFP.

"I was very good mentally, but playing against him is always a challenge. "On a fast surface like grass all matches are very close. I was close to losing," Nadal added, according to AFP.

Under normal circumstances, 10th seed Jo-Wilfried Tsonga five set win over the Ukrainian Alexandr Dolgopolov would have been described as epic.

Earlier in the day, Britain's Andy Murray coasted to a straight sets victory over the Finn Jarkko Nieminen, 6-3 6-4 6-2 in front of Queen Elizabeth II, who watched the number 4 seed from the royal box.

It was the monarch's first visit to the All England Club since 1977 when she was in attendance to see Britain's Virginia Wade win the women's title.

There were also wins for lower ranked seeds including Thomaz Bellucci (25th seed) of Brazil who beat Austrian Martin Fischer in four sets 6-7 7-6 7-6 6-2.

France's Gilles Simon (26) progresses to the third round after Ukrainian Illya Marchenko withdrew with a shoulder injury.