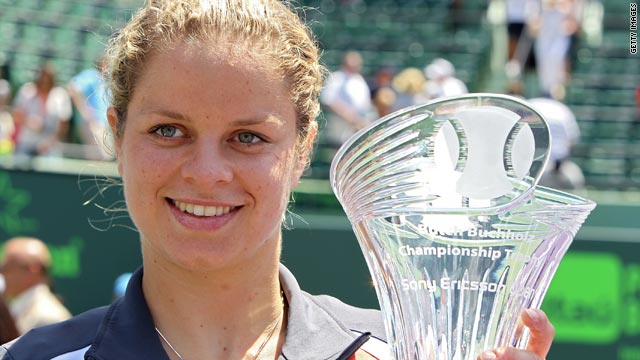 U.S. Open champion Kim Clijsters won her 37th title on the WTA Tour and her second in the Miami event.
STORY HIGHLIGHTS

(CNN) -- Kim Clijsters continued her successful return to tennis by demolishing American third seed Venus Williams in the final of the Sony Ericsson Open in Miami on Saturday.

The Belgian, a former world No. 1 but seeded 14th for this event following her two-year absence from the women's circuit, will move up to 10th in the rankings next week following her one-sided 6-2 6-1 triumph at Key Biscayne.

Williams had been hoping for a fourth title at the event, having won her last two tournaments, but was well below par as Clijsters added to her 2005 victory in Miami in just 58 minutes.

The 26-year-old claimed her third title since making her comeback last year after giving birth to baby daughter Jada, who was watching her mum from the stands again on Saturday.

Against a player like Kim, if you make too many errors, the match can go quickly. I was my own worst enemy
--Venus Williams
RELATED TOPICS

The 2009 U.S. Open champion notched up her 37th triumph in WTA Tour events, 28 of those now on hardcourt surfaces.

She passed $17 million in career earnings after taking home the $700,000 first prize -- which is almost $100,000 more than the winner of Sunday's men's final between Andy Roddick and Tomas Berdych will receive.

Clijsters, who defeated fellow comeback queen Justine Henin in an epic semifinal on Friday, broke Williams to love to seal the title.

"It took a lot of hard work to get back into shape and I have a few people to thank, including my fitness coach and husband," Clijsters said on-court after the match.

"It feels really good to be back here, having won the title in 2005. It's always nice to come back to a place you have done well before, and to such a beautiful stadium."

Williams, cheered on by injured younger sister and current No. 1 Serena, made 29 unforced errors to Clijsters' 12 as she struggled to continue her recent good run of form.

"Sometimes when you hit a few bad shots it's not as easy to reel it in, and things start to go a little bit quicker," said Williams, who will rise to fourth in the rankings.

"Obviously against a player like Kim, if you make too many errors, the match can go quickly. I mean, I think she hit eight winners, so it wasn't that she played extremely solid -- it's not like I was blown off the court. Unfortunately I was my own worst enemy today."