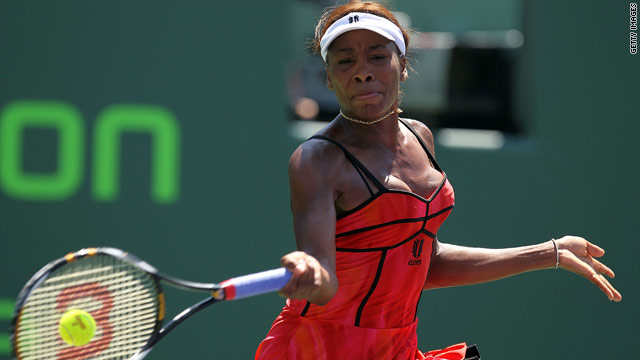 (CNN) -- Venus Williams stretched her unbeaten run to 15 games after seeing off France's Marion Bartoli to book her place in the final of the Sony Ericsson Open in Miami.

The world number five beat her opponent 6-3 6-4 in just under 90 minutes and could be poised to clinch her first Miami title since 2001.

Williams will now meet Kim Clijsters in the final, after the Belgian saw off compatriot Justine Henin in three tough sets.

Bartoli, the number 13 seed, had played Williams twice before they met in Miami, losing in the final at Wimbledon in 2007 but winning in the Bank of the West Classic final at Stanford last year.

Williams secured an early break in the first game of the first set before Bartoli pegged her back but the number three seed closed out the opener 6-3.

Then after going a break down in the second set Williams recovered again to close out the match.

Williams will now face Clijsters, as she bids to add the Miami title to her wins in Dubai and Acapulco since the turn of the year. "I'm very pleased to be in the final but it's not enough -- I want to take the title," Williams told reporters.

The showdown was the second this year between the two rivals who have come out of retirement in the last year.