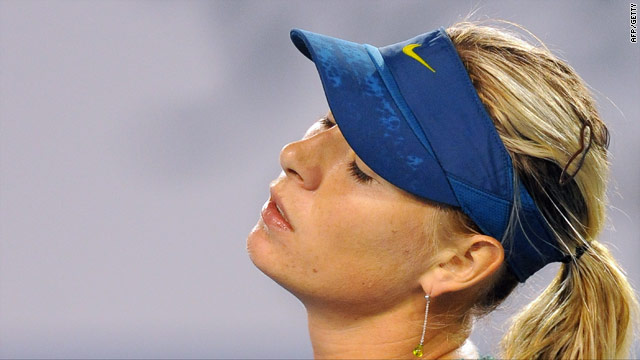 Sharapova has struggled to regain her former top ranking after injury.
STORY HIGHLIGHTS

(CNN) -- Maria Sharapova has been hit by a new injury setback and will be sidelined for up to six weeks, according to the Russian's tennis star's personal Web site.

Sharapova aggravated an elbow injury as she lost to China's Zheng Jie in a marathon three-set match at the WTA event in Indian Wells.

A later MRI scan revealed bone bruising to the elbow and she immediately pulled out of the prestigious tournament at Key Biscayne in Florida later this month.

Sharapova told reporters that she had first felt the problem during last year's U.S. Open at Flushing Meadows, but really started to feel it in the deciding set against Zheng in a two hours 43 minute encounter.

"I just felt like I couldn't really extend it all the way. It was a little stuck. So it was going on for a while, but I thought it would be best to call the trainer," she said.

The three-time grand slam champion has suffered a string of injuries, culminating in serious shoulder surgery in October 2008 which saw her sidelined for nearly 10 months.

She has steadily clawed her way up the rankings and was 10th seed at Indian Wells, but her performances in grand slams have been disappointing and she went out in the first round of the Australian Open to fellow Russian Maria Kirilenko.

Sharapova admitted to reporters after her defeat to Zheng that she would liked to have moved up the rankings faster, but was still proud of her efforts, which culminated in a 21st career title on the WTA Tour in Memphis last month.

"I mean, I think I'm doing a lot better than other people that have had shoulder surgery in their careers," she said.

"Some people have never come back. I don't know. What, I'm 13 in the world or something? That's a lot better than some of the girls I've lost to in the last year," she added.

Off the court, Sharapova's appeal remains as strong as ever and in January she renewed her contract with Nike, signing an eight-year deal worth a reported $70 million.