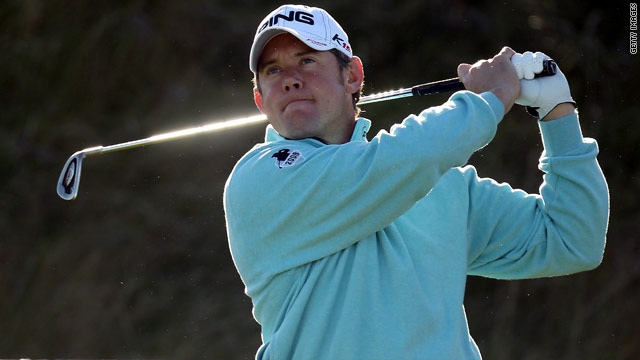 Lee Westwood takes over from Tiger Woods as world number one, ending the American's 281 weeks at the top.
STORY HIGHLIGHTS
RELATED TOPICS

(CNN) -- Lee Westwood has taken over from Tiger Woods as golf's new world number one, after Martin Kaymer failed to finish in the top two in the Andalucia Masters at Valderrama on Sunday.

Briton Westwood, who becomes the first European to top the world rankings since Nick Faldo in 1994, has climbed to the summit despite never having won one of golf's four 'major' titles.

And in doing so, the 37-year-old ends Woods' remarkable 281-week reign as the world's top golfer.

Woods has been top of the tree since permanently taking over from Fiji's Vijay Singh in June 2005.

Westwood opted to skip this week's European Tour event in Spain, meaning European Ryder Cup colleague Kaymer could have snatched the top position if he had won the tournament or shared second place with no more than one other player.

However, the German struggled throughout the event and a final round four-over-par 75, 10 shots behind eventual winner Graeme McDowell, ensured he finished well outside what he needed to overtake Westwood.

"Lee really deserves it, he's one of the greatest guys on Tour," Kaymer told reporters. "At the Ryder Cup he showed what kind of person he is and I'm very happy for him."

Westwood's first tournament as world number one will be next week's WGC-HSBC Champions event in Shanghai, where Woods will also be in action.

Meanwhile, U.S.Open champion McDowell held on for victory at Valderrama, despite finding the blustery conditions difficult on his way to a final round three-over-par 74.

McDowell finished on a 72-hole total of 281 (-3) to come home two strokes clear of fellow-Ulsterman Gareth Maybin, who struggled to a 76, Dane Soren Kjeldsen (69) and Irishman Damien McGrane (72).

McDowell's seventh European Tour win -- and third this year -- lifts him into the top 10 in the world rankings and closes the gap on Kaymer in the battle to finish top of the Race to Dubai list, which determines who finishes 2010 as European Tour No.1.

Meanwhile, American Ben Crane carded a final round two-under-par 69 to win the Asia-Pacific Classic in Malaysia by one shot from Englishman Brian Davis.

A final round 66 saw Davis threaten to take the first PGA Tour event to be played in Southeast Asia to a play-off.

But Crane sank a pressure-putt on the final hole to collect a $1m winners prize in a tournament co-sanctioned with the Asian Tour.