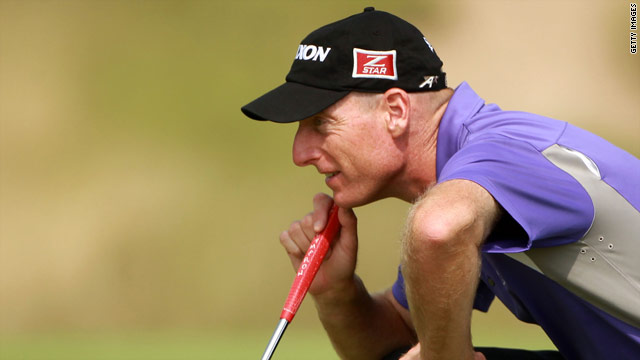 Jim Furyk missed his tee-off time because his alarm ran out of power.
STORY HIGHLIGHTS

(CNN) -- American golfer and world number six, Jim Furyk, was kicked out of the first FedEx Cup play-off on Wednesday after missing his tee-off time by oversleeping.

Furyk, 40, told the official website of PGA Tour that he set an alarm on his cell phone which ran out of power overnight and failed to wake him up.

"The hotel had power ... but somehow my phone died. I never use a backup because I just figure if the phone is charged, I'm good to go," Furyk said.

After waking five minutes before he was due to start playing, Furyk made a dash from his hotel to the course but failed to get to the 11th tee of The Barclays tournament in New Jersey in time.

Injury or family emergency are the only reasons that excuse a player's absence, consequently, Furyk will miss Thursday's planned round with countryman Steve Stricker and Ernie Els of South Africa.

Somehow my phone [and its alarm] died. I never use a backup because I just figure if the phone is charged
--Jim Furyk
RELATED TOPICS

"The rules are rules. No matter what tournament it was, I would be upset. But I'm more upset because it's this one," Furyk added.

It means Furyk misses an opportunity to cement his third-place playoff standing in the race to be crowned champion. According to the playoff scenarios he could see his position slide to 19th before the Deutsche Bank Championship next week in Boston.

One consolation to Furyk is that he already has enough points for the 30-man season-ending Tour Championship to be staged in Atlanta in September.

Slugger White, the Tour's vice president of rules and competition told the PGA Tour website: "It is unfortunate. Knowing Jim as I do and we all do, he handled it extremely professionally and put all of the blame on himself.

"He is a fan favorite and everybody likes him. He is a really good guy, but my hands are tied. I am sure he will recover quite nicely next week and jump right in there again."

Furyk is due to win his seventh Ryder Cup cap against Europe at Celtic Manor in October.