Woods returning home to see family ahead of British Open 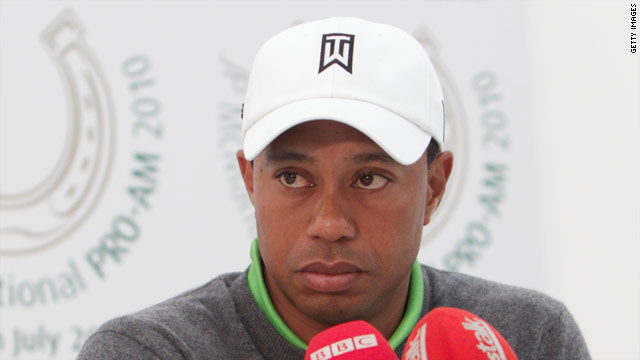 World No. 1 Tiger Woods played at an invitational pro-am event at Adare Manor in Ireland on Tuesday.
STORY HIGHLIGHTS

(CNN) -- Tiger Woods is still trying to strike the right balance between his private life and golf ahead of the British Open at St Andrew's in Scotland next week.

Speaking to the media after scoring a dismal round of 79 at an invitational event in Ireland on Tuesday, the 34-year-old revealed that he would be returning home to the U.S. to spend time with his children instead of remaining in Europe to practice for the July 15-18 major tournament.

But in his first European appearance since his self-imposed absence from the game following his admitted extra-marital affairs, the 14-time major winner did not show the humility he displayed at a February press conference in the U.S. when he publicly apologized for his behavior.

Instead, the American was short, and occasionally silent, when met with questions about his personal life. When asked why he would not be practicing on a links course ahead of the British Open, he replied abruptly: "Because I need to go home."

Golf is something I have done for a very long time, and there are times in one's life when things get put into perspective
--Tiger Woods
RELATED TOPICS

When pressed for a specific reason, he added: "To see my kids."

He also hinted that golf had become more trivial to him since the details of his private life were made public late last year.

"Golf is something I have done for a very long time, and there are times in one's life when things get put into perspective," Woods told the gathered reporters.

"One was when my father passed, and also what I have been going through lately."

However, the world's No. 1 golfer was more forthcoming when questioned over how his game has been progressing since his return to competition earlier in the year.

"I felt I made some good strides last week," Woods said of his performance at the AT&T National in Pennsylvania, where he finished tied for 46th place.

The three-time British Open champion also spoke of his love of the Scottish coastal course, and how he would love to win golf's biggest tournament again.

"It's a fantastic golf course and what genius it took to lay it out that way," Woods said. "This is where it all started, there is a special feeling. To walk up the last hole, I've had that at other championships before but this one is different.

"To win at the home of golf, that would be what every champion wants to have happen."