FIFA finds shortcomings in World Cup bids ahead of vote 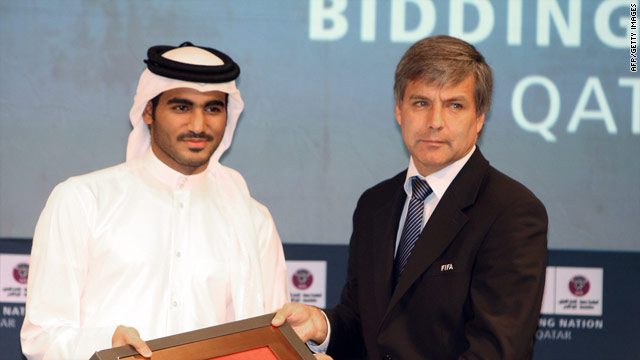 (CNN) -- FIFA has cast doubts on the hopes of several countries bidding to host the 2018 and 2022 World Cup tournaments in a technical evaluation report released by soccer's governing body on Wednesday.

Russia, seeking to host football's premier event for the first time in 2018, was criticized for its limited transport options -- which may cause problems due to "the country's vastness and remoteness'" the report said.

Its information and communications technology needs to be upgraded, while 13 of its proposed 16 stadiums will be started from scratch and its accommodation plan suggests "a dependence on construction and modernization in the hotel sector."

Russia received a "low risk" legal rating, as did its main European rivals England and Spain-Portugal, but the Belgium-Netherlands joint bid was marked "medium risk".

England, the 1966 host, received a mainly favorable evaluation but it failed to meet FIFA's requirements for venue-specific training sites and accommodation.

The Spain-Portugal bid also fell short in required contracted venue-specific training sites, but it has an advantage over England in that there are no government restrictions on media rights.

The Belgium-Netherlands bid fell short in team facility and accommodation requirements, and did not supply the necessary government guarantees to satisfy FIFA's protection program needs.

Of the 2022 candidates, Qatar's bid was highlighted as having the most shortfalls -- mainly due to the small size of the country, its excessively hot climate during the tournament months of June-July, and the need to start most construction from scratch.

"The fact that 10 out of the 12 stadiums are located within a 25-30 kilometer radius could represent an operational and logistical challenge," the report said.

"Any delay in the completion of the transport projects could impact FIFA's tournament operations. Moreover, it appears to be difficult to test a transport concept prior to the event under conditions comparable to the World Cup.

"The fact that the competition is planned in June-July, the two hottest months of the year in this region, has to be considered as a potential health risk for players, officials, the FIFA family and spectators, and requires precautions to be taken."

The Qatar bid was praised for a novel aspect to its stadium plans, which would see modular sections used to build 22 grounds around the world in developing countries.

Its time-zone difference of three hours from Europe means it rated higher in terms of television revenue -- an area where rivals Australia, South Korea and Japan fell down.

Australia's geographical size was also highlighted as a potential problem, while it failed to meet FIFA's accommodation requirements, but it was rated a low legal risk.

The United States' size was not deemed to be problematic given the competitiveness of its air industry, but the report noted temporary transport would have to be provided to and from most of the proposed stadiums.

The U.S. government did not provide the necessary guarantee, but FIFA said the country's past experience in hosting major sports events -- including the 1994 World Cup -- had proved its willingness to make material concessions" and "accommodate the concerns of event organizers."

The U.S. bid had the highest projected tickets sold of almost five million, and the report said "TV ratings and media rights in the Americas are likely to be higher."

Japan and South Korea are seeking to stage the event for the second time, having been co-hosts in 2002.

Japan's bid focused on innovative high-tech aspects, and was praised for its facilities and transport, though its government did not provide the required guarantees and it was rated a medium legal risk.

South Korea, which hopes to stage some games in the North, met most requirements but received one black mark in that "the majority of FIFA's constituent target groups would be accommodated in two or three-star quality standard rooms."

It was given a low legal risk rating, but FIFA said its broadcasting law "adversely affects the free and unrestricted exploitation of media rights" and therefore needs to be suspended.

FIFA's executive committee members, who have been lobbied by all the candidates and visited their facilities, will vote to decide the hosts for both tournaments on December 2.

Other factors apart from the technical requirements have historically played a part in awarding hosting rights.

FIFA took the 2010 tournament to South Africa despite a lack of existing infrastructure in a bid to develop football on the continent, having done the same in the U.S. in 1994.

Meanwhile, FIFA's ethics committee will announce on Thursday the fate of the two executive committee members accused of offering to sell their World Cup votes, the UK Press Association reported on Wednesday.

The ethics committee also investigated claims of illegal collusion between bid candidates at its three-day hearing in Switzerland this week.