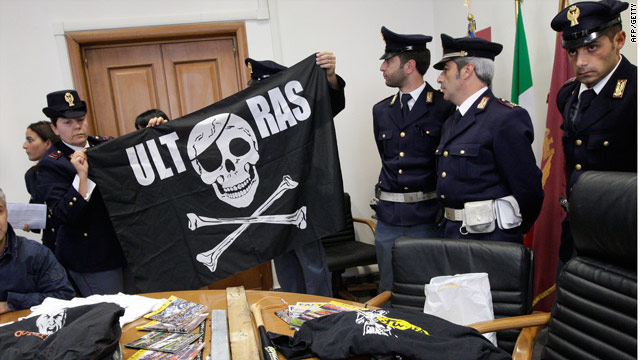 Rome, Italy (CNN) -- Four English football fans were attacked in Italy on the eve of a game Thursday between Liverpool and Naples, Naples police told CNN.

Two were stabbed and have been hospitalized with serious but not life-threatening conditions, police said. Two were beaten with sticks and one is hospitalized in serious condition, they said.

The other one, who was attacked in a different incident, is not badly hurt. Three men have been arrested.

Police blamed the attacks on "football fanaticism" and are looking for the other attackers, they said.

Tempers already were running high in Naples because tons of uncollected garbage is piling up, a result of landfills in the region being full.

Police said security for Thursday's match pitting Liverpool against Serie A side Napoli is tighter than usual because of the garbage crisis.

Liverpool Football Club warned supporters traveling to Italy for the Europa League match to "be careful, stick together and heed the safety advice printed on your ticket."