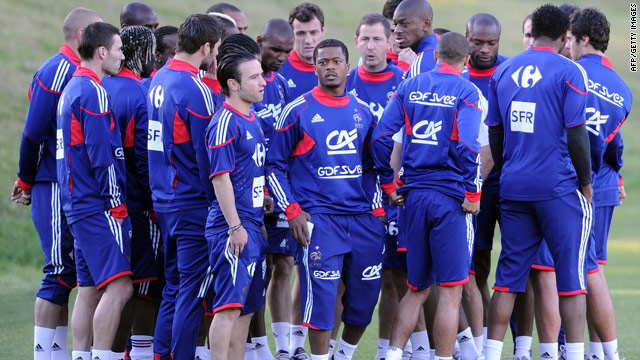 (CNN) -- New France coach Laurent Blanc has chosen not to select any of the 23-man World Cup squad, that refused to take part in a training session during their disastrous tournament, for next month's friendly international against Norway.

Blanc, who took over from Raymond Domenech following France's exit at the group stage of the competition, opted to exclude the whole squad for one match as a punishment for their role in the protest that came just two days before their final match against host nation South Africa.

The French Football Federation confirmed the decision on their official website, with a statement saying: "Laurent Blanc proposed to the federal council not to retain any of the 23 players officially selected for the World Cup in South Africa, for the friendly match against Norway in Oslo on Wednesday August 11.

"Laurent Blanc will release the list of players selected for this match on Thursday August 5."

Captain Patrice Evra then became involved in a heated public argument with coach Robert Duverne -- resulting in Duverne storming off the training ground with the squad retreating to their team bus and refusing to train.

Among the players now not available to Blanc are Arsenal trio Bacary Sagna, Gael Clichy and Abou Diaby, Bayern Munich winger Franck Ribery, Barcelona's Eric Abidal, Chelsea's Anelka and Florent Malouda and playmaker Yoann Gourcuff -- who Blanc coached when he the pair were at Bordeaux.

We went too far. It was a very awkward decision, a big mistake. It was completely stupid.
--Hugo Lloris
RELATED TOPICS

However, there is no suggestion that the ban will last longer than a single match and many of the players are expected to return for the opening Euro 2012 qualifier at home to Belarus -- although it remains to be seen whether Anelka and Evra, who were perceived as the ringleaders, will return to the squad.

Goalkeeper Hugo Lloris earlier admitted to L'Equipe newspaper that the players had made a mistake in refusing to train.

"We acted as a team. To strike was the decision of a squad who felt lonely, who believed that no-one had stood up for them and who had a message to convey.

"We went too far. It was a very awkward decision, a big mistake. It was completely stupid. But there were so many problems."

Lloris' Lyon teammate Jeremy Toulalan told the Journal du Dimanche: "I'm not proud of what I did but I accept responsibility. There were no ringleaders and no slaves, no good guys and no bad guys. We were all involved and we are all responsible because nobody said a word against the boycott."