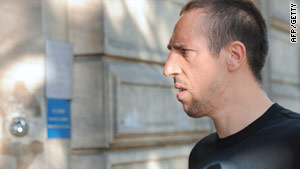 Paris, France (CNN) -- An attorney for a French soccer star said Wednesday there is "no evidence" her client ever knew that the striking prostitute he admits having sex with was under age.

Franck Ribery, 27, who plays for the French national team, was questioned by police Tuesday along with teammate Karim Benzema, 22, and Ribery's brother-in-law.

Police formally accused them of soliciting an under aged prostitute. It means they were not charged or arrested, but police opened an investigation into the allegations.

The case emerged earlier this year after police raided a night club near the Champs Elysees in central Paris and detained 18 girls on suspicion of prostitution.

One of the girls, Zahia Dehar, appeared on the cover of Paris Match in April and told the magazine she had sexual relations with several players on the national team, including Ribery, whom she had met at the club. She said in the interview she hadn't told them she was younger than 18 at the time.

In an initial court hearing on the case, Ribery admitted he had sex with Dehar but insisted he did not know she was a minor.

"He is innocent until proven guilty," Ribery's lawyer, Sophie Bottai, said Wednesday. "I am sure the investigation will prove that Ribery was never aware of her age."

Asked about a plane ticket that Ribery allegedly bought for Dehar -- which may have allowed Ribery to check her passport and learn her real age -- Bottai said he never personally booked the ticket and never saw her passport.

"There is no evidence that he was ever aware of her age," Bottai said. "She told him she was 20 years old."

The investigation adds to a disastrous summer for the French national squad, which crashed out of the World Cup in the first round following two draws and a defeat that left them at the bottom of their group of teams. It was an embarrassing exit for the team that had reached the final of the last World Cup in 2006 and won the tournament in 1998.

Forward Nicolas Anelka was sent home from the tournament after an argument with coach Raymond Domenech, causing the rest of the French players to refuse to show up for training.

French team director Jean-Louis Valentin publicly announced his resignation, and team captain Patrice Evra -- who had publicly argued with the team's fitness coach during training -- was omitted from the team's match with South Africa.

Once the team arrived back in France, striker Thierry Henry spoke to French President Nicolas Sarkozy, and French lawmakers grilled outgoing coach Domenech about the events.