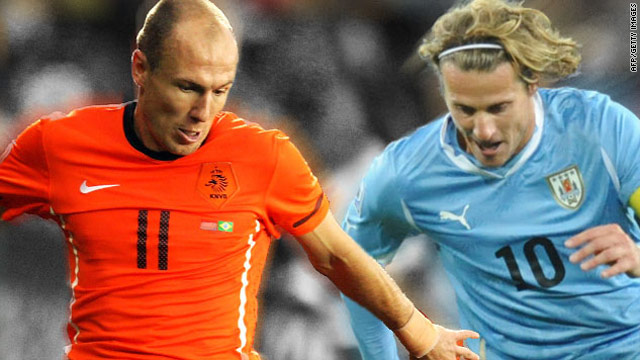 Editor's note: CNN will be providing minute-by-minute coverage of both World Cup semifinals and the final on July 11.

(CNN) -- Uruguay coach Oscar Tabarez: "It was a match worthy of a semifinal. I am proud of my players, but we accept defeat against a team who were better than us. We are sad because we weren't far away."

Germany have been thrilling to watch at this World Cup but I'd love Spain to join the Netherlands in final so we see a new champion, tweets CNN's Alex Thomas.

Dutch coach Bert van Marwijk: "It's amazing that we have managed to do this. It's been 32 years. It is unbelievable. We can be very proud for such a small country."

Dutch go through, Uruguay not happy and there's a bit of pushing and shoving. My money is on Germany to meet them in the final -- next stop Durban, tweets CNN's Ben Wyatt.

Final whistle: After that late scare it's the Dutch who are celebrating their third appearance in a World Cup final with a 3-2 victory. Read the match reportGloom descends on Montevideo, chance of sunshine on Sunday in Amsterdam? tweets CNN's Armchair fan Matt Booth.

91 minutes: 3-2 ! Pereira pulls one back for Uruguay with a low shot from the edge of the area. Plucky lot this team.

86 minutes: Robben is put through after a superb Dutch break but cannot find a way past Muslera.

80 minutes: Ten minutes to go and it looks like the Dutch are headed for a final clash against either Gemany or Spain, an all-European final which looked unlikely after the group stages.

72 minutes: 3-1 and a superb header from header from Robben after a Kuyt cross. It's an uphill struggle for the Uruguayans now.

Don't want to get ahead of ourselves but you get the feeling the winner of Spain v German will be strong favorites to win the final, reckons CNN's Alex Thomas.

69 minutes: 2-1 to the Netherlands: Sneijder's shot takes a double deflection and goes through legs of Van Persie who looked offside. They all count and fifth goal of the tournament for the brilliant midfielder, if you count the opener in the win over Brazil.

68 minutes: Game hotting up at last, as Van Persie plays in van de Vaart who forces a fine save from Muslera and Robben shoots over from the rebound.

66 minutes: Forlan free kick has Stekelenburg stretching to tip away, partially making amends for his first half blunder.

60 minutes: An hour gone and no significant action in the second half as the cagey play continues.

Nervous opening start to the second half with neither side able to get into a rhythm.

Oh come on Holland! You're making me more nervous than I am already! tweets Winchester 1984

Second half has kicked off with all still to play for. Rafael van der Vaart has come on for de Zeeuw who took that nasty kick in the head.

Two classic World Cup goals mask what has been a fairly cagey first half. There's been some beautiful Dutch passing, but everytime Forlan gets the ball you get the feeling he can make something happen for Uruguay, sums up our CNN Armchair tweeter Matt Booth.

Half-time: Two superb strikes from either side, first by Giovanni van Bronckhorst with Diego Forlan scoring the equalizer leave it at 1-1 at the break and all to play for in the second half.

Why did the Dutch give Forlan so much space? Have they not been watching this World Cup? tweets CNN's armchair expert.

40 minutes: 1-1. Diego Forlan, who else with his fourth goal of the tournament, a long range effort which eludes Dutch keeper Stekelenburg. The movement of the ball appears to deceive Stekelenburg, who looks crestfallen.

Netherlands could win this one but Germany will win the cup, tweets Sky Blik.

34 minutes: Cavani gets in promising position down the right for Uruguay and gets blocked out by resolute Dutch defense. It's an improvement for the South Americans.

30 minutes: Delightful pass from Van Persie plays in Robben but he is marshalled by Caceres in a crucial intervention.

26 minutes: De Zeeuw left flat out after being kicked in the head by Caceres, who was attempting a scissor kick. Bit of a melee ensues and Sneijder and Caceres get yellow cards.

Not even Suarez could have kept that out ! tweets PCasey. quite.

Holanda sera Campeona del Mundo, tweets JuaanCasanova, which by my Spanish means Holland will be champions of the world, well on the evidence of that goal perhaps Casanova's right.

17 minutes: Van Bronckhorst puts the Dutch 1-0 up with a stunning 30 meter strike which flies past Muslera !

9 minutes: Kuyt cross nearly fell to the head of Dutch talisman Robben but Muslera is able to catch.

Vuvuzelas not as loud as normal in this one, can actually hear the crowd, tweets Matt Booth.

3 minutes: First significant action as Kuyt's shot goes just over the Uruguayan crossbar after nervous defense by the South Americans.

The first semifinal of the 2010 World Cup has kicked off in Cape Town between Uruguay and the Netherlands.

The Dutch are favorites to go through to the final and certainly the favorites among the neutrals after Uruguay's controversial defeat of Africa's last hope Ghana in the quarters on penalties.

The pre-match talk is still the handball incident which means Uruguay's Luiz Suarez is suspended for the game against the Netherlands, but not the final should they win.

A bigger blow is the loss of injured captain Diego Lugano in central defense and the excellent Diego Forlan, one of the players of the World Cup, takes over the armband.

Jorge Fucile is also suspended for Oscar Tabarez's men, the last team from South America in the competition and bidding to win football's global showpiece for the third time.

The Netherlands, who knocked out five-time winners Brazil, will be seeking to reach the final of football's showpiece event for the third time.