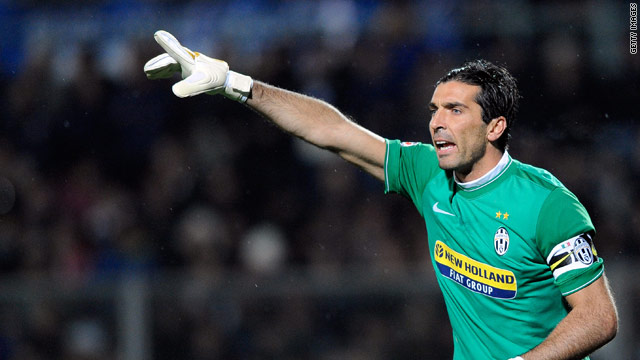 Gianluigi Buffon is the world's most expensive goalkeeper after joining Juventus for $49.2 million from Parma in 2001.
STORY HIGHLIGHTS

The Juventus player underwent the operation on Sunday to repair a herniated disc in his back, and said afterwards he is in no hurry to return to action.

"I feel relieved now," Buffon told Juventus' official website. "The intervention went well and this gives me faith and serenity. I must not hurry.

"I need to take the due time to come back with no trouble and no risk of recurrence."

I feel relieved now. The intervention went well and this gives me faith and serenity. I must not hurry
--Gianluigi Buffon
RELATED TOPICS

The 32-year-old suffered the injury in Italy's opening World Cup match against Paraguay in Group F, which forced him to miss the rest of the tournament in South Africa.

The world champions suffered without Buffon, finishing bottom of the group as they failed to make it past the first round of the competition.

Buffon, who has won the Serie A Goalkeeper of the Year award a record nine times, is looking forward to working with new Italy manager Cesare Prandelli, who replaces the departed Marcello Lippi.

"Considering my role, I think my career is still a long one and without the hernia I would have been able to lengthen it further," Buffon told Italian newspaper La Repubblica.

"My future with the national team? I believe I deserve my place.

"I've had Prandelli as a rival coach since my youth years and I knew back then that he has an exceptional rapport with his players. He is part of the group and I think that is very important."

Buffon, who has 102 caps, will replace Fabio Cannavaro as Italy's captain once he is fit again following the defender's retirement from international duty after the World Cup exit. He was previously national skipper at Euro 2008 when Cannavaro was ruled out by injury.

The 24-year-old, who spent last season at Roma as part of a co-ownership agreement, has been training with his new teammates in Pinzolo since Saturday ahead of the move.

The Turin club has the option to buy the right-back at the end of the loan deal.