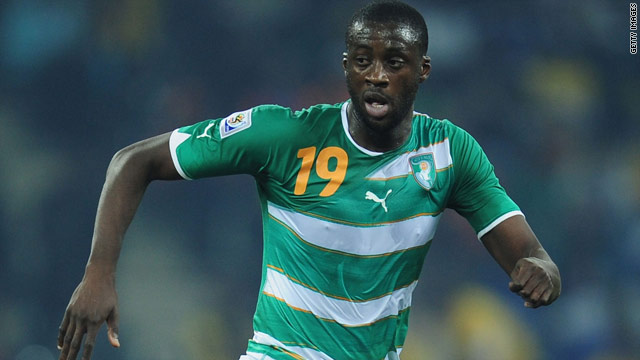 Yaya Toure was an integral part of the Ivory Coast team that played at the World Cup.
STORY HIGHLIGHTS

The Ivory Coast international, who returned from South Africa this week after his country was knocked out of the World Cup, will join his elder brother and club captain, Kolo, at Eastlands.

During his three-year spell at the Camp Nou, the 28-year-old was a regular starter for the Catalan giants as they won back to back Spanish league titles and the Champions League.

A fee has not yet been confirmed by the club but reports earlier this week suggested the deal could be worth £28million ($42.7 million), Britain's Press Association said.

"Everyone knows Yaya is a player that we have admired for a long time.
--Roberto Mancini
RELATED TOPICS

"This is another fantastic signing for Manchester City, and I am very pleased Yaya has joined us, he is a very good player," manager Roberto Mancini told the club's website, mcfc.co.uk.

"Everyone knows Yaya is a player that we have admired for a long time, and we would like to welcome him to Manchester City.

"He has played at the top level with Barcelona and I am sure he his experience and ability will be very important for us."

On Wednesday the club announced that Valencia striker David Silva would be joining them after he returns from World Cup duty with Spain.