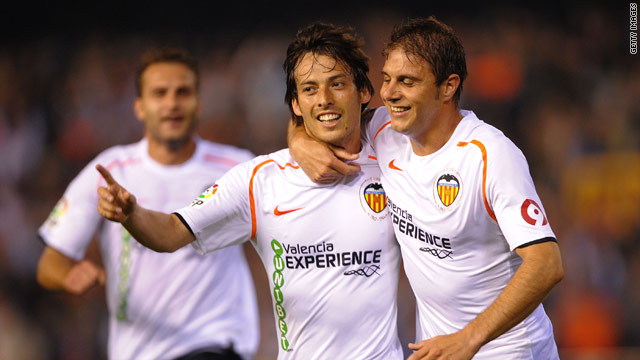 Spain's David Silva (left) will become a Manchester City player once he returns from the World Cup in South Africa.
STORY HIGHLIGHTS

CNN -- Manchester City announced a deal to sign Spain international David Silva from Valencia on Tuesday as the big-spending English club continued preparations for success in the Premier League next season.

Coach Roberto Mancini has already lined up the signing of Hamburg's Germany defender Jerome Boateng, which will be completed on Thursday, while Barcelona's Ivory Coast midfielder Yaya Toure is also poised to move to City.

Silva is expected to sign a four-year contract once he returns from the World Cup in South Africa.

Spanish media reports claim the deal to bring the attacking midfielder to the City of Manchester Stadium is worth around €32 million ($39.1 million).

I am so pleased he is coming to us, I think he can make a big, big impact for Manchester City
--Roberto Mancini
RELATED TOPICS

"The player's advisors and officials from both clubs have finalized the details over a four-year contract," City said in a statement.

Mancini is a big fan of Silva and expects the 24-year-old to be an important player in the club's charge for honors next season.

"I am so pleased he is coming to us, I think he can make a big, big impact for Manchester City," the Italian told the club's official website.

"In signing David, we are showing the world that we are bringing the best players here and that we hope to compete to win the Premier League.

"When players see what is happening at Manchester City and the ambition they are attracted to what we are building and want to be a part of it."

He has played 37 games for Spain and scored seven times since making his international debut in November 2006 against Romania, and was a key figure in the team that won Euro 2008 in Austria and Switzerland.

Cash-strapped Valencia had little choice but to sell another star player due to club debts in excess of €500 million ($612.3 million).

Striker David Villa, who has so far netted four goals in four games at this year's World Cup, was sold to rivals Barcelona in May for a reported fee of €40 million ($48.9 million).

Speaking about the move, Silva thanked his former club for its support and also announced he is looking forward to playing in the Premier League.

"Firstly I would like to thank Valencia as a club and all of their loyal fans, and my teammates there and staff," he told City's official website.

"I have enjoyed six years at Valencia, they discovered me as a footballer and they will always be a special club for me. The time is right for me to seek a new challenge, and I am thrilled about playing in England with Manchester City.

"I believe the Premier League is one of the best competitions in the world and I want to bring success to City and win trophies for them."

Manchester City, bought by an oil-rich Abu Dhabi consortium in 2008, failed to secure a Champions League place last season after finishing fifth in the league despite spending more than £100 million ($122.4 million) on new players.

More big names are expected to follow Silva to City in pre-season as the club seeks its first Premier League title in 2010-11.