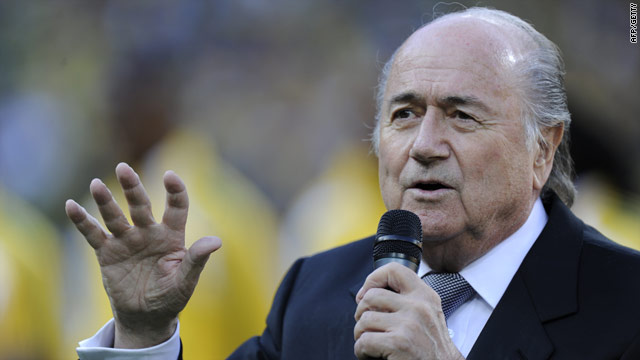 (CNN) -- FIFA president Sepp Blatter has done a U-turn over the use of goal-line technology and apologized to the English and Mexican football associations for controversial refereeing decisions in their last 16 defeats.

FIFA confirmed to CNN Tuesday that the next meeting of its International FA Board from July 21-22 in Wales would discuss technology but the use of video replays is ruled out.

Frank Lampard's goal that never was as England trailed 2-1 just before halftime in their last 16 match against Germany, prompted widespread calls for the introduction of goal-line technology after his shot clearly crossed the line.

In a later match on Sunday, Argentina's Carlos Tevez scored a hotly-disputed opening goal against Mexico in their 3-1 victory and television replays, which were broadcast on big screens at the ground, showed him to be offside.

I apologized to England and Mexico
--Sepp Blatter

Blatter told a media briefing in Johannesburg: "It happened in 1966 and then 44 years later -- though it was not quite the same," the UK's Press Association reported.

This was a reference to England's disputed third goal against West Germany in the 1966 World Cup final where arguments have raged for years over whether Geoff Hurst's shot crossed the line.

"I apologized to England and Mexico.

"The English said 'thank you and accepted that you can win some and you lose some, and the Mexicans bowed their head and accepted it."

But the Swiss is still set against the wider use of video technology where play might be stopped to allow a replay to be examined.

"The only principle we are going to bring back for discussion is goal-line technology," he said

Time for football to embrace technology ?

"Football is a game that never stops and the moment there was a discussion if the ball was in or out, or there was a goal-scoring opportunity, do we give a possibility to a team to call for replays once or twice like in tennis?

"For situations like the Mexico game you don't need technology."

Blatter added that the world governing body would launch a new drive to improve refereeing standards at the highest level later this year.

"We will come out with a new model in November on how to improve high level referees," he said.

"We will start with a new concept of how to improve match control. I cannot disclose more of what we are doing but something has to be changed."