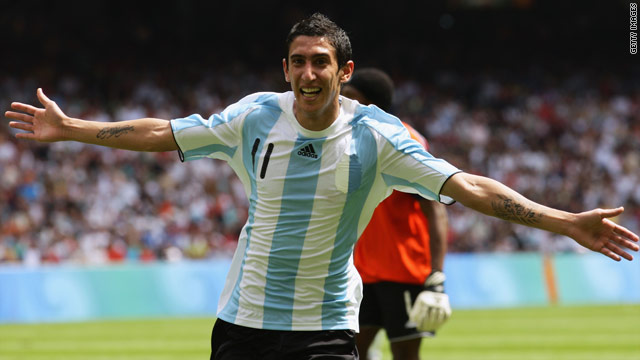 CNN -- Spanish giants Real Madrid have confirmed they have reached an agreement with Portuguese club Benfica for the transfer of Argentina striker Angel di Maria.

The 22-year-old is expected to sign a six-year-deal at Madrid with the fee believed to be in the region of $30 million.

Di Maria is Jose Mourinho's first signing since taking over as manager from Manual Pellegrini at Madrid on May 31.

"Real Madrid and Benfica have come to terms for the transfer of Angel di Maria. The player will sign a six-year contract," the club said in a statement on their website.

The attacking midfielder won the 2007 World Under-20 championship with Argentina in Canada.

He also scored the winner against Nigeria in the final at the 2008 Beijing Olympics.

Di Maria is currently on international duty at the World Cup in South Africa, and has started all four of Argentina's matches.

He started his career at CA Rosario Central of Argentina before moving to Benfica in 2007 after a host of impressive displays.

He then alerted many of Europe's top clubs last season after helping Benfica claim a Portuguese league and cup double.

Di Maria is expected to be the first in a string of big name signings as Mourinho attempts to wrest the Spanish league title back from rivals Barcelona.