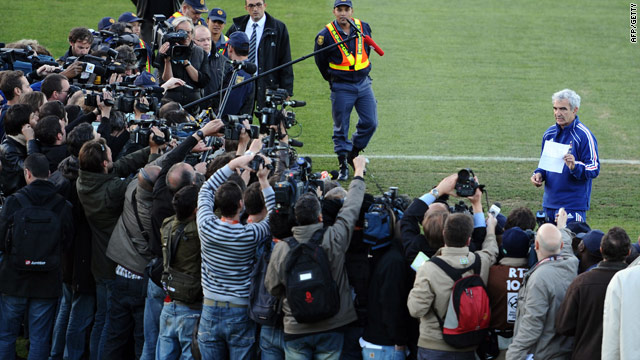 France coach Raymond Domenech faces a media scrum as he reads out the statement.
STORY HIGHLIGHTS

In a bizarre twist, coach Raymond Domenech had to read out a statement from the team to explain their decision.

"All players without exception want to declare their opposition to FFF (French Football Federation) decision to exclude Nicolas Anelka," he said.

"For its part, the FFF has at no time tried to protect the group.

"They made a decision without consulting all the players, only on the basis of the 'facts' reported by the press."

"Accordingly, and to mark their opposition to the highest level of French football, all players decided not to participate in the work-out."

Despite their refusal to train, the players added that they would "do everything individually and in a collective spirit so that France regains its honor against South Africa on Tuesday."

France must beat the hosts and hope the result of the other match in Group A between Mexico and Uruguay goes their way to have any chance of qualifying for the last 16.

Their hopes were dealt a near fatal blow by a 2-0 defeat to the Mexicans on Thursday, after which it emerged that Chelsea star Anelka and under fire coach Domenech had a massive row at halftime.

Anelka was substituted but reports of his tirade against Domenech were picked up by the media, prompting the French Football Federation to take the decision to send him home on Saturday.

Captain Patrice Evra was incensed by the leak, claiming there was a "traitor" in the French camp.

As the squad came on to the training ground at Knysna on Sunday, Domenech and Evra were still in discussion on the team bus.

The pair eventually emerged, but Evra then became involved in a shouting match with fitness coach Robert Duverne, who reacted by angrily throwing down his official accreditation badge.

The squad, who said they only turned out to greet fans, promptly walked off and were joined by Domenech on the bus, after which he emerged to read out the statement.

To add to the chaos, a distraught France team director Jean-Louis Valentin publicly announced his resignation to the media.

"Ask the players, they do not want to involve themselves any more. It's unacceptable," he told AFP.

"It is a shame. As for me, it's over. I'm leaving the federation. I'm sickened and disgusted."

2006 runners-up France have picked up just one point from their two games, a dull goalless draw with Uruguay.

But it was the lackluster display against Mexico which provoked a storm of criticism, much of it directed at Domenech, who is standing down after the World Cup finals.

Domenech, who is being replaced by Laurent Blanc, told the French Football Federation official website that Anelka could have stayed had he apologized for his halftime remarks.

"I had another chat with him (Anelka) the next day and I left open the possibility for him to apologise, something which he did not want to do," he said.

"The decision to exclude him was the right one. He does not have the right to say such things."