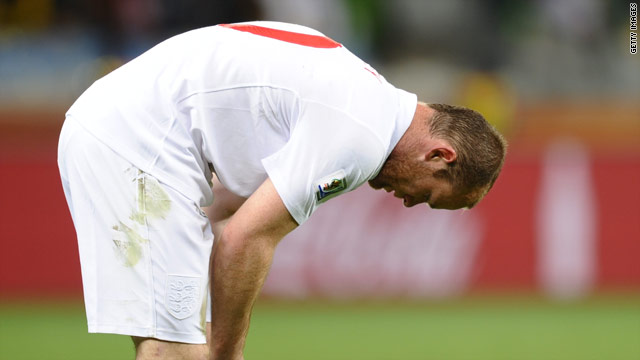 Down but not yet out. Wayne Rooney contemplates their goalless draw against Algeria.
STORY HIGHLIGHTS

(CNN) -- Fabio Capello's England were held to a disappointing goalless draw by Algeria in their World Cup Group C clash in Cape Town on Friday night.

Following the earlier 2-2 draw between Slovenia and the United States, it means all four teams can still qualify for the last 16 knockout stage.

England will play group leaders Slovenia and the U.S. take on Algeria, whose confidence will be boosted after keeping Capello's men at bay.

The Italian showed his ruthless streak by dropping goalkeeper Robert Green, after his blunder cost England dear in a 1-1 draw with the U.S. in their group opener.

His replacement David James was scarcely called into action after an early mis-punch which seemed to sum up a nervy England display.

Chelsea midfielder Frank Lampard had their best chance in the first half but saw his effort from 10 meters out well saved by M'bohi Rais Ouheb, who had an excellent game in the Algeria goal.

With England's talisman Wayne Rooney again kept in check, they were only a shadow of the team which breezed through qualifying and entered the tournament as one of the favorites.

Capello, who surely could have found better ways to celebrate his 64th birthday, was perplexed by his team's display.

"This is not the team I recognize from training or from qualifying," he told ITV Sport.

"We missed too many passes, lost too many balls. It was not a good game. We have to do better.

"We have another game to play. It's our last chance to continue in the tournament. The players know what they have to do."

Earlier, the United States came back from two goals behind to draw 2-2 with Slovenia in a pulsating encounter in Johannesburg.

First half goals from midfielder Valter Birsa and striker Zlatan Ljubijankic looked to be enough to guarantee Slovenia would reach the last 16, but it proved only the signal for a courageous fight back by the U.S.

LA Galaxy star Landon Donovan pulled the first goal back in the 48th minute as he smashed his shot into the roof of the net with ferocious power.

The equalizer came with nine minutes remaining as Jozy Altidore headed down for Michael Bradley -- son of coach Bob Bradley -- to convert with an equally emphatic strike.

The U.S. looked to have scored the winner when Maurice Edu prodded home a Donovan free kick from the right, but referee Koman Coulibaly had already blown for a foul to the dismay of the Americans.

"I am assuming it was a foul, it couldn't have been an offside, we asked the referee many times, but he couldn't explain it," man of the match Donovan told AFP.