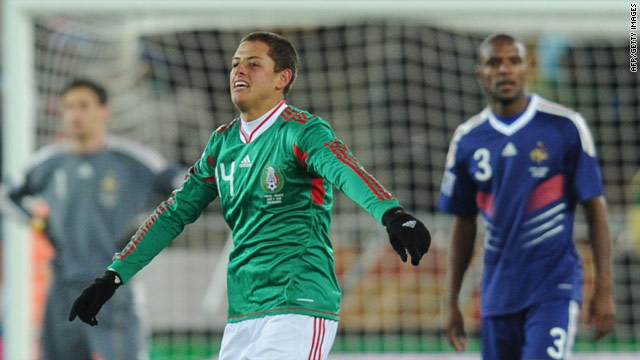 (CNN) -- Mexico dealt a body blow to the World Cup chances of former champions France with 2-0 win over Les Bleus in their Group A clash in Polakwane on Thursday.

Second half goals from Javier Hernandez and veteran Cuauhtemoc Blanco gave them a deserved victory against Raymond Domenech's men, who again disappointed.

The result also means that Mexico and Uruguay are both assured of qualification if they draw their final group match in Rustenburg on June 22 whatever the outcome of France's game against hosts South Africa.

Hernandez made the breakthrough in the 64th minute as he rounded Hugo Lloris in the French goal to score after being put through by his captain Rafael Marquez.

The clinching goal in the 78th minute came through a penalty by Blanco, awarded after his fellow substitute Pablo Barrera had burst into the penalty area past Patrice Evra to be brought down by Eric Abidal.

The 37-year-old Blanco took a long run-up and beat Lloris with ease.

The Mexicans, who drew their opening match against the hosts, were always the more lively side with Arsenal's Carlos Vela and Carlos Salcido both having half chances with Lloris the busier goalkeeper.

France looked to improve after the interval and Chelsea's Florent Malouda had their best opportunity as his powerful shot was pushed over, but it was just about all they had to show in an attacking sense and the omens do no look good for the 2006 runners-up.

Domenech said it was now a question of salvaging pride after winning a solitary point from their two games following a tepid goalless draw against Uruguay.

"We need a miracle now," he told AFP.

"We have to be strong and at least play for our honor. At least we must show something in the last match. When we are forced to rely on others, there's nothing to say," added Domenech who will stand down as France coach after the finals.