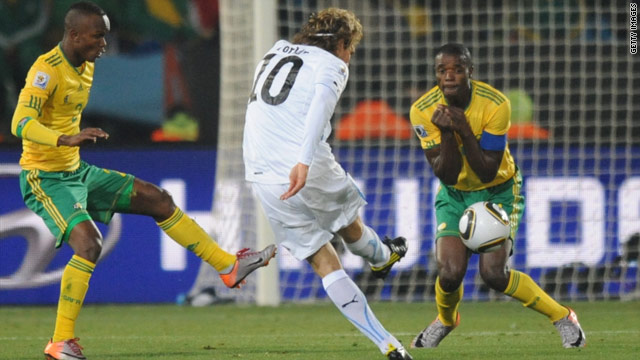 (CNN) -- South Africa's World Cup dream is hanging by a thread after Uruguay took a firm grip on Group A with a ruthless 3-0 win over the hosts.

Diego Forlan gave the South American side a first half lead after his shot deflected off Aaron Mokoena and into the net.

South Africa pushed forward in the second half but their hopes were dashed when Uruguay striker Luis Suarez was brought down in the penalty area by goalkeeper Itumeleng Khune, who was sent off.

Forlan converted the resulting penalty past substitute 'keeper Moeneeb Josephs to kill the hosts off and send many South Africa fans heading for the exits.

Alvaro Pereira converted a late third as South Africa desperately tried to salvage something from the game.

Uruguay go top of Group A with four points from their two games. South Africa have a solitary point after two games, and must beat France in their final game to have any hope of progressing to the knock out stages.

The hosts had gone into the game buoyed by their opening day draw with Mexico and riding a wave of emotion after the country enthusiastically embraced the first ever World Cup held on African soil.

Group A was delicately poised after all four teams drew their opening game and it was Uruguay who started the more positively, striker Luis Suarez shooting wide after just seven minutes.

On 20 minutes Forlan broke the deadlock. Picking the ball up in midfield the Atletico Madrid forward surged towards the edge of the penalty area before unleashing a fierce drive on goal. The ball took a touch off Mokoena and dipped under the crossbar.

South Africa struggled to retain possession as Uruguay pushed forward but the game reached the interval with no further scoring.

The hosts played with more urgency after the break but couldn't unearth a chance before the game's decisive passage of play.

On 75 minutes Suarez picked up a loose ball in the area before being clipped by Khune's leg. The referee pointed to the penalty spot and showed the goalkeeper a straight red card.

Forlan slotted the penalty into the roof of the net to take the stuffing out of South Africa and as coach Carlos Alberto Parreira's ten men edged forward in search of a goal Uruguay killed them off.

Suarez collected Forlan's long pass before crossing for Pereira to bundle the ball home and put the game beyond doubt, right on the final whistle.

Group A's other teams -- France and Mexico -- play on Thursday night in Polokwane. South Africa's final game is against France on Tuesday.