Italy stutter to draw with Paraguay 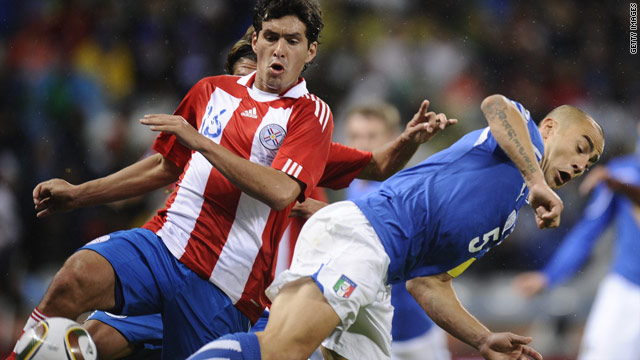 (CNN) -- World Cup holders Italy came back from a goal behind to secure an unconvincing 1-1 draw with Paraguay in their opening Group F match.

The South Americans took a deserved lead after 39 minutes through Antolin Alcaraz's header but an error from goalkeeper Justo Villar gifted Daniele De Rossi the equalizer in the second half.

Italy improved as the game wore on but failed to force a winning goal amid driving rain at the Green Point Stadium in Cape Town. They will have to raise their performance level if they are to match Brazil's tally of five World Cups in South Africa.

"I just regret that we did not get the points we deserved, but sometimes that's what happens, you get less than you deserve," Italy coach Marcelo Lippi told AFP.

"The important thing is this was not a decisive game. What is important is that people now realise we are here and have got our act together."

As has become characteristic in this tournament, the opening exchanges were extremely cautious with both sides limited to shots from distance.

Paraguay opened Italy up with a sharp counter-attack after 21 minutes, the ball breaking to Aureliano Torres on the edge of the area, but he dragged his shot wastefully wide.

Perhaps unsurprisingly the opening goal came from a set piece, with Alcaraz jumping above Italy captain Fabio Cannavaro and De Rossi to meet Torres's free-kick with a firm header into the corner.

Italy appeared relieved when the half-time whistle arrived having struggled to cope with Paraguay's pressing game and spent much of the time bickering with each other or the referee.

The defending champions were forced into a change at the break with goalkeeper Gianluigi Buffon replaced by Federico Marchetti.

Italy raised the tempo of the game in the second half and Simone Pepe almost converted a fine cross from Gianluca Zambrotta.

But the South Americans remained a danger on the break and Enrique Vera should have done better with a shot which found the side netting.

With the game seemingly drifting away, Italy coach Marcelo Lippi made a crucial change, bringing on Mauro Camoranesi and reverting from a 4-3-3 to a 4-4-2 system.

The rethink energized Italy and their equalizer arrived just after the hour mark. A corner kick from the left flew over the outstretched fist of Villar, leaving de Rossi with a simple tap-in on the volley.

Villar was a busy man for the rest of the game, pulling off saves from Pepe and Riccardo Montolivo as Italy pressed for a winner but Paraguay held on for a creditable draw.

"To play against such a rival with such skills is a very good sign for us. It gives is a lot of confidence going ahead in this tournament."

New Zealand takes on Slovakia in the other Group F game on Tuesday.