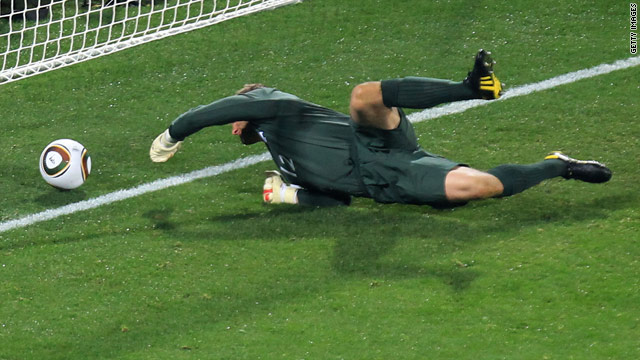 England goalkeeper Robert Green desperately tries to claw the ball back after his error.
STORY HIGHLIGHTS

(CNN) -- A disastrous blunder by England goalkeeper Robert Green cost his side victory as they drew 1-1 with the United States in their Group C opener in Rustenburg on Saturday night.

England were leading 1-0 through a fourth minute Steven Gerrard goal approaching halftime when Clint Dempsey sent in a weak shot from just outside the penalty area.

It appeared to be a routine save for Green but astonishingly he let the ball slip through his grasp and despite a despairing dive saw it trickle into the net.

England captain Gerrard gave his side a dream start after he latched on to a neat pass from Emile Heskey to beat Tim Howard in the U.S. goal with ease.

Fabio Capello's men were holding onto their lead comfortably enough, aside from a scare when Jozy Altidore connected with a Landon Donovan cross to send his header wide, until the fortunate 40th minute equalizer.

The second half saw England press for the winner and Heskey was sent clear by Aaron Lennon but shot straight at Howard.

Wayne Rooney also sent a shot narrowly wide and cleverly set up substitute Shaun Wright-Phillips for a chance from the left side of the penalty area which he sent straight at Howard.

The idea tonight was to win the game, but unfortunately we have let a poor goal in and we couldn't go on and get the winner
--Steven Gerrard
RELATED TOPICS

But English hearts were in their mouths as Altidore outpaced Jamie Carragher, who came on for the injured Ledley King at halftime, and bore down on goal.

This time Green came to the rescue, parrying his effort against the post to partially redeem himself for an error which will live long in the memory.

There was no masking the disappointment in the England camp at the final whistle.

Catch up with CNN's twitter.buzz

"The idea tonight was to win the game, but unfortunately we have let a poor goal in and we couldn't go on and get the winner," Gerrard told ITV Sport.

"The target now has got to be seven points."

England's next game is against Algeria in Cape Town on Friday with the United States taking on Slovenia in Johannesburg.

Capello would not confirm if he will stand by Green for a game which now takes on added significance.

"Sometimes a forward misses a goal and sometimes the keeper makes a mistake, this is football. The second half he played very well," said the Italian.