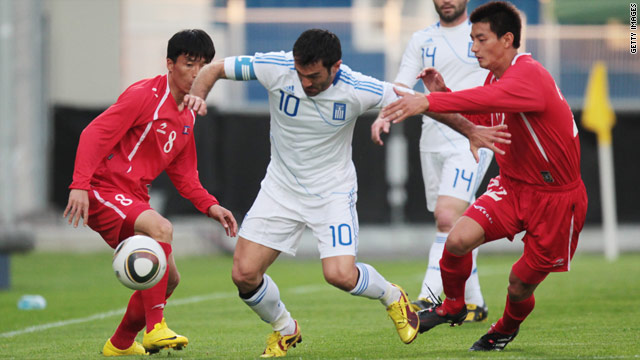 Greece's Georgios Karagounis battles to get past two North Korea players during their 2-2 draw in Austria.
STORY HIGHLIGHTS
RELATED TOPICS

(CNN) -- North Korea twice came back from behind to hold Greece 2-2 in a friendly between two sides heading to the World Cup next month, while fellow finalists Paraguay lost 2-1 to the Republic of Ireland.

In a match played at a neutral venue in Altach, Austria, Costas Katsouranis gave Greece the lead in the second minute with a close-range finish.

Angelos Charisteas came off the bench to put the Greeks 2-1 in front shortly after half-time but, three minutes later, Jong raced down the right flank, cut inside and slammed home his second.

Greece substitute goalkeeper Alexandros Tzorvas had to be at his sharpest to keep out a powerful shot from Cha Jong-hyok that could have won the game for the Asian side.

In Dublin, first-half goals from Kevin Doyle and Liam Lawrence helped Ireland to victory over the South Americans.

Wolves striker Doyle bundled the opener after Paraguay forward Roque Santa Cruz had headed against his own bar.

Lawrence smashed home the second in the 39th minute following a chest down from Doyle.

Lucas Barrios pulled a goal back on his Paraguay debut but Giovanni Trapattoni's men held on for victory.

The Paraguayans are in the same group as defending champions Italy, New Zealand and Slovakia at the World Cup.

Elsewhere, there were disappointing results for two of the African qualifiers as Cameroon drew 0-0 with Georgia and Nigeria tied 0-0 with Saudi Arabia.