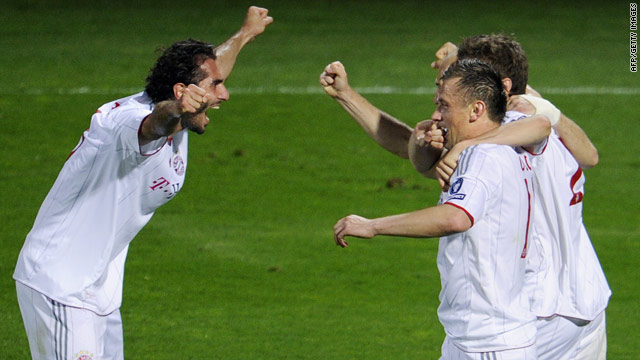 The Bavarian giants will now face either Inter Milan or Barcelona in the showpiece at Real Madrid's Bernabeu stadium next month, after a one-sided match at the Stade Gerland, which saw the home side finish with 10 men after the second-half dismissal of captain Cris.

Bayern came into the match on the back of last week's 1-0 home victory and they missed a glorious chance to double their lead in just the second minute when Thomas Muller fired wide when free left unmarked in the area.

Can Magath produce another miracle?

However, they didn't have long to eventually take the lead, Muller cutting the ball back on the left for Olic to turn in the area and fire home from close range.

The goal meant Lyon now needed to score three times to progress -- and their task turned from difficult to virtually impossible when captain Cris was shown a second yellow card for sarcastically applauding the referee after appearing to be harshly booked for what looked a well-timed tackle.

Ten-man Lyon bravely came foward looking to get back into the match, but they were caught on the break when Hamit Altintop sent a brilliant ball through to Olic who timed his run to perfection, beating the offside trap before slotting home a diagonal shot.

Then, with 12 minutes remaining, Olic headed home Philip Lahm's cross from the right to complete a memorable night for him and ensuring Bayern reached their first Champions League final since defeating Valencia in 2001.