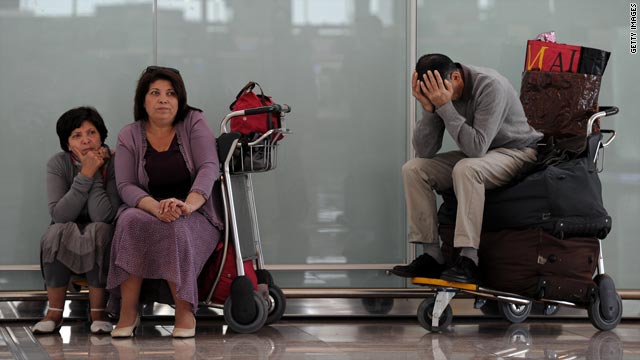 (CNN) -- Europe's top soccer teams will play their Champions League semifinals this week after opting to undertake grueling bus journeys to avoid the flight restrictions enforced due to the volcanic ash from Iceland which has paralyzed air travel in the region.

Titleholders Barcelona have begun a 1,000-kilometer road trip from northern Spain to Italy for the first leg of Tuesday night's semifinal against Inter Milan.

The Catalan club's Web site reported that the squad left on Sunday afternoon for a 634 km trip to Cannes in France, where they will stay overnight before completing the further 351 km to Milan.

Spanish leaders Barcelona drew 0-0 with city rivals Espanyol on Saturday night, but midfielder Sergio Busquets told reporters on Sunday afternoon that the difficult schedule was no excuse for not performing well at Inter's San Siro.

"We are in with a chance to reach another final and we don't want to throw that away. We have been having a lot of big games and it's not the ideal way to travel to Milan, but there can be no excuses," he said, according to Barcelona's Web site.

"Maybe spending so long together on a coach will bring us closer and help us focus on beating Inter. It's a long time on the road and we're not really used to that, but with music and a film or two, I'm sure the trip won't seem so long."

French club Lyon also have a long journey ahead for the first leg of their last-four clash with German leaders Bayern Munich on Wednesday.

The squad will be back on the bus again for a 750 km trip to Bavaria, stopping overnight in the Swiss city of Zurich before arriving in Germany on Tuesday.

"Seven hours on the bus wasn't easy. We didn't sleep, but it was a good chance for a chat," captain Cris said in quotes carried by Bayern's Web site on Sunday.

"It'll be a total of 10 hours on the bus, which is hard," the Brazilian said of the next stage of the journey. "But there's no choice and we have to accept it."

European football's governing body UEFA said on Sunday that decisions about Thursday's semifinals of the second-tier Europa League would be made in the next few days.

Liverpool must travel to Spain to play Atletico Madrid, while fellow English club Fulham must go to Germany to take on Hamburg in the first legs of their last-four ties.

The UEFA Women's Champions League semifinal between Umea IK and Lyon in Sweden scheduled for Sunday was postponed as the French side could not travel.