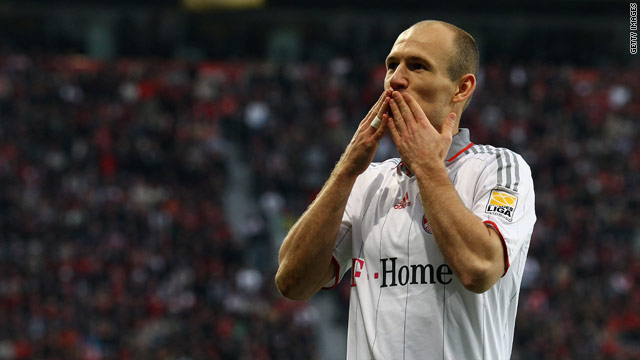 (CNN) -- Bundesliga leaders Bayern Munich battled to 1-1 draw at third-placed Bayer Leverkusen on Saturday to stretch their advantage over Schalke to two points.

Schalke earlier suffered a shock 4-2 defeat at Hannover but Bayern were unable to take full advantage despite taking a 51st minute lead through Arjen Robben.

Leverkusen, who remain six points adrift, leveled through Arturo Vidal within 10 minutes, but could not force a winner to revive their title challenge.

Leverkusen might have gone ahead in the first half of the crunch encounter but Eren Derdiyok's 31st-minute header was saved by Hans-Jorg Butt and Tranquillo Barnetta hit the post with the Bayern keeper beaten.

Bayern, who knocked Manchester United out of the Champions League in midweek, made them pay early in the second half as Franck Ribery was pulled down by Gonzalo Castro to win a penalty.

Robben, who scored the crucial goal against United, beat Rene Adler from the spot kick for the opener.

Stefan Kiessling hit the woodwork for Leverkusen again from a header before Toni Kroos saw his shot hit the post but Vidal made no mistake from the rebound.

Kroos and Derdiyok wasted chances to win it for the home side while Bayern had late penalty appeals turned away.

Earlier, the Royal Blues of Schalke followed their 2-1 loss to Bayern last week with a shock reverse against third-bottom Hannover, who are coached by their former boss Mirko Slomka.

They trailed 2-0 to an own-goal by Heiko Westermann and the first of two from Ivory Coast star Didier Konan Ya by the half-hour mark.

But Schalke fought back to pull level at 2-2 through an Edu Goncalves goal and a penalty from Croatian international Ivan Rakitic.

But Hannover went ahead again with 10 minutes left through captain Hanno Balitsch before Konan Ya rounded off the win in injury time with a fine solo goal.

Werder Bremen stepped up their challenge for a Champions League place with a 4-0 thrashing of Freiburg while Borussia Dortmund in fourth went down 1-0 at Mainz.

In the Scottish Cup semifinals, there was a massive shock as Celtic's sorry season continued with a 2-0 defeat to second-flight minnows Ross County, who scored second half goals from Steven Craig and Martin Scott for a deserved win over the Glasgow giants.