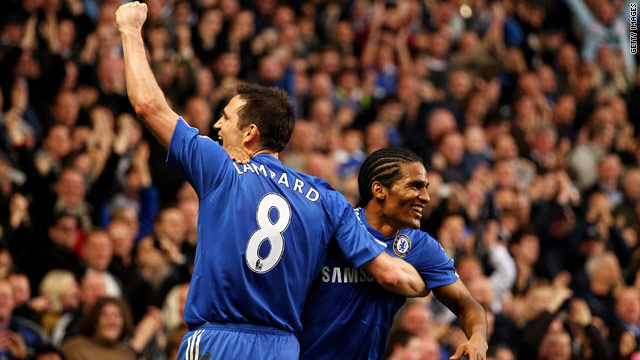 The London club briefly returned to the top of the table before champions United won 4-0 at Bolton in the late match to restore their one-point advantage.

With the title race set to go to the wire, Chelsea will take a two-goal for-and-against differential over United to Old Trafford on Saturday after thrashing Villa at home to follow up the midweek 5-0 romp at Portsmouth.

Frank Lampard fired four goals, two of them from the penalty spot, to become Chelsea's third-highest scorer on the club's all-time list with 151.

Norway striker John Carew canceled out Lampard's 15th-minute opener for his ninth goal in eight games, but Chelsea led 2-1 at halftime with the England midfielder's first spot-kick just before the break.

France winger Florent Malouda, who set up the opener, scored the first of his two goals 12 minutes after the interval to open the floodgates, with four more coming in the final half-hour as Lampard took his season tally to 21 in all competitions.

The result was even more remarkable given that Chelsea coach Carlo Ancelotti opted to rest 30-goal striker Didier Drogba, while John Terry broke the club record with his 325th outing as captain.

It ended Villa's 10-match unbeaten run, leaving the visitors seven points adrift of Tottenham in the battle for the fourth Champions League place.

Manchester United, by comparison, cruised past a struggling Bolton team thanks to a fortunate own-goal from JLloyd Samuel and a second-half double from Dimitar Berbatov.

Veteran keeper Edwin van Der Sar preserved the lead with a flying save from Fabrice Muamba, but the Dutchman was lucky to avoid an embarrassing moment when the home side took a quick corner while he was well out of his goal arguing with the referee.

Berbatov, playing on his own up front, made it 2-0 in the 68th minute when he was first to react after Jaaskelainen could only parry Darren Fletcher's shot, then the Bulgarian sealed victory 10 minutes later with a slick finish from Nani's low cross.

Portugal winger Nani, who signed a new contract during the week, then set up young substitute midfielder Darren Gibson on 82.

Third-placed Arsenal's title hopes were dented after conceding a late equalizer at Birmingham.

France midfielder Samir Nasri put the Londoners ahead with a low drive in the 81st minute, but veteran substitute Kevin Phillips netted a fortunate leveler in injury-time as Bacary Sagna's attempted clearance hit him and rebounded into the net past goalkeeper Manuel Almunia.

The draw left Arsenal four points behind United with six matches to play ahead of Wednesday's Champions League quarterfinal against holders Barcelona, while ninth-placed Birmingham are unbeaten at home since last September.

Tottenham consolidated fourth place with a 2-0 victory at bottom side Portsmouth as England striker Peter Crouch and Croatia midfielder Niko Kranjcar scored in the first half against their former club.

Fifth-placed Manchester City will seek to close the deficit on Spurs to two points again with victory at home to Wigan on Monday, while Liverpool will look to keep their slim top-four hopes alive with a win over Sunderland on Sunday.

Everton remained in eighth place with a 0-0 draw at Wolverhampton, who are now five points clear of the relegation zone.

Stoke moved up to 10th with a 1-0 win at West Ham, who were left hovering above the drop zone on goal difference.

Hull joined West Ham on 27 points with a 2-0 victory against Fulham, who dropped to 11th.