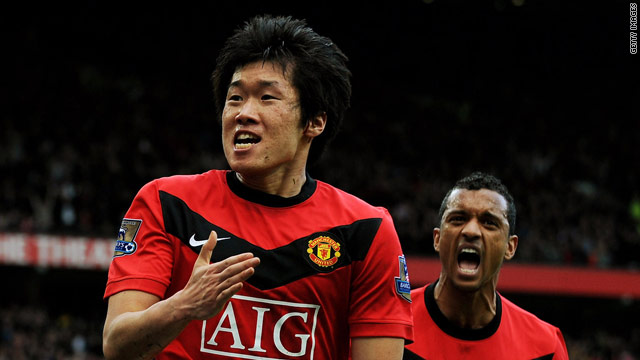 The goal came in controversial circumstances with Javier Mascherano's foul on Antonio Valencia appearing to start outside the area.

Rooney's initial spotkick was saved by Pepe Reina, but the England striker continued his rich scoring vein by hitting home the rebound in the 12th minute.

In a second half of few openings, South Korean star Park dived to power home the winner on the hour mark from man of the match Darren Fletcher's superb cross.

Torres, who had started and finished the move to put Liverpool ahead, fluffed a great chance to equalize in the the last minute, but his shot ballooned high and Yossi Benayoun could only head it straight at Edwin van der Sar.

The win takes United two points clear of Arsenal on 69 points after 31 games.

Third-placed Chelsea were later held to a 1-1 draw at Blackburn to be four points adrift, but with a game in hand.

It was another setback for Chelsea, who were knocked out of the Champions League by Inter Milan in midweek.

Didier Drogba gave Carlo Ancelotti's men an early lead at Ewood Park as he neatly converted Nicolas Anelka's cross, but they were unable to press home their advantage.

El-Hadji Diouf equalized for the home side in the 70th minute when he rose above Paulo Ferreira to cleverly direct Michel Salgado's cross past Petr Cech.

Fletcher claimed their earlier victory over Liverpool, who are battling with Tottenham, Manchester City and Aston Villa for the final Champions League spot, had put the pressure on Chelsea.

"The team that puts the most consistent run to the end of the season will probably be the champions," Fletcher told Sky Sports.

Fulham were feeling the effects of their famous win over Juventus in midweek and fell behind to first half goals from Roque Santa Cruz and Carlos Tevez, who starred for the visitors.

Fulham captain Danny Murphy pulled one back from the spot in the 75th minute but they could not force an equalizer.

City move above Liverpool into fifth place, two points adrift of fourth-placed Tottenham, but with a game in hand.