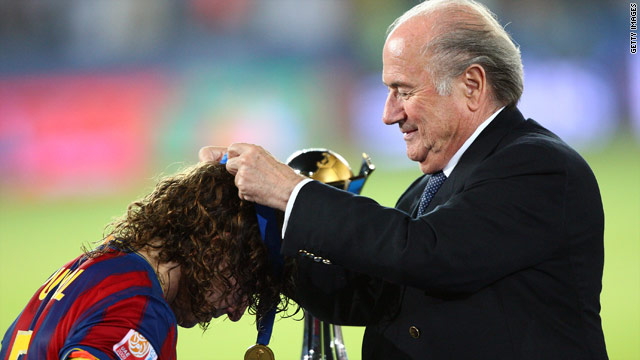 FIFA President Sepp Blatter has said he will only embrace goalline technology which is accurate and immediate.
STORY HIGHLIGHTS
RELATED TOPICS

(CNN) -- Football players are pushing for the sport's world governing body FIFA to bring in technology to decide whether the ball has crossed the goalline.

In a poll by international players' union FIFpro, 90 percent of respondents said they wanted to see goalline technology introduced.

FIFpro has submitted the findings to the International Football Association Board, FIFA's lawmaking body, which is meeting on Saturday, March 6, to discuss possible changes to the laws of the game.

Tijs Tummers, secretary of FIFpro's technical committee, said players have had enough of games being blighted by incorrect decisions over goals.

"The ultimate aim of football is scoring goals, and there's no greater injustice than when you have scored and it's not allowed because they say it did not cross the line," Tummers told CNN.

"Every weekend you see a situation like this in one of the top European leagues.

"There are no buts. It's very simple. The only argument against is that you say we want to keep a human feel but in the opinion of FIFpro and the players that is nonsense."

German sportswear giant Adidas has been working on a form of technology involving a microchip in the ball, while other options include a version of the Hawk-Eye system of computerized cameras currently used in tennis.

FIFA President Sepp Blatter has called for a system which is accurate but doesn't disrupt the flow of the game.

FIFA has tested goalline technology in junior tournaments but has recently moved away from further trials in favor of a simpler system involving two extra assistant referees stationed at each end.

The scheme, favored by UEFA President Michel Platini, has been tested in the Europa League this season but has proved unpopular with coaches and players.

FIFpro polled the 48 captains who have played in the Europa League this season, with 70 percent of the 31 who responded saying they saw no improvement in decision-making.

The row between extra referees and technology is on the agenda for the IFAB meeting, with any changes to be implemented next season, after the World Cup.

Other issues under review include whether players who concede penalties through professional fouls should also be sent off, and whether players should continue to be allowed to feint their run-ups when taking penalties.