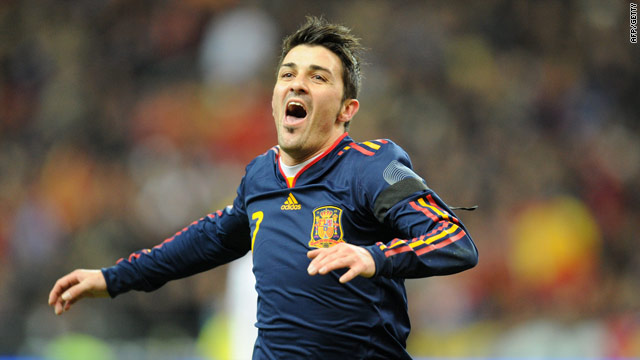 (CNN) -- European champions Spain underlined their credentials as one of the favorites for the World Cup with a 2-0 victory over France at the Stade de France on Wednesday night.

FIFA's top-rated nation scored first half goals through David Villa and Sergio Ramos to deflate France, who were playing their first match since their controversial qualification for South Africa at the expense of Ireland.

The emphatic win increases the pressure on French coach Raymond Domenech, whose popularity continues to plummet while Thierry Henry, whose infamous handball helped eliminate the Irish, was jeered when he left the field in the second half by a frustrated home crowd.

It all added up to a night of misery for the French with their supporters taking to cheering every pass completed by the stylish Spanish side.

France did make a good start and Franck Ribery impressed on the right side of midfield, but in the 21st minute David Silva dummied Andres Iniesta's through pass and his Valencia teammate Villa easily beat Hugo Lloris.

The vital second goal arrived just before halftime as Real Madrid's Ramos was given too much time and space to cut inside and curl home a shot with his left foot with flicked off Julien Escude and past Lloris.

Barcelona midfielder Xavi and Liverpool's Fernando Torres were given run outs by Spain in the second half and Sevilla winger Jesus Navas almost made it 3-0 in injury time as his shot went narrowly wide.

Domenech's men had to wait until the 80th minute to seriously threaten the Spain goal as Chelsea's Florent Malouda headed against the post after a cross from fellow substitute Djibril Cisse.

In the other prestige friendly on Wednesday between traditional powerhouses, Diego Maradona's Argentina beat Germany 1-0 in Berlin.

Real Madrid's Gonzalo Higuain scored the only goal just before halftime as he beat onrushing home keeper Rene Adler to a through ball and rounded him to score.

The Netherlands edged past the United States 2-1 win with goals from Dirk Kuyt from the penalty spot and Klaas Jan Huntelaar, while Uruguay came from behind to win 3-1 in Switzerland.