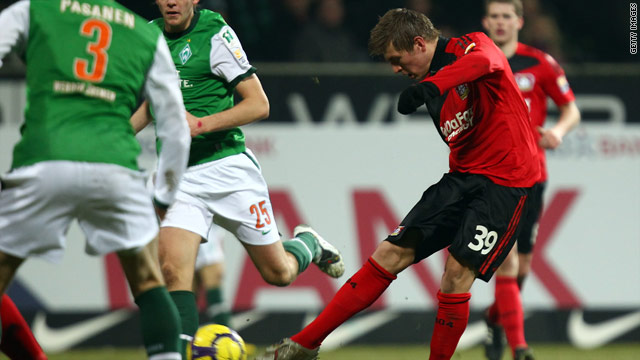 Tony Kloos blasts Bayer Leverkusen's second goal but they were held up by a late equalizer.
STORY HIGHLIGHTS
RELATED TOPICS

(CNN) -- Bayer Leverkusen reclaimed top spot in the Bundesliga from Bayern Munich with a 2-2 draw at Werder Bremen to extend their unbeaten run to a record equaling 23 games.

Eren Derdiyok gave Leverkusen the lead in the 29th minute, but Claudio Pizarro equalized for the home side five minutes later.

Toni Kroos put Leverkusen ahead again in the 57th minute only for Per Mertesacker to salvage a draw for Bremen in injury time.

The late goal meant Bayer failed to take full advantage of Bayern Munich's 1-1 draw at Nuremberg on Saturday, but they go ahead of the Bavarian giants on goal difference.

Bayer's coach Jupp Heynckes was a member of the Bayern Munich team in the 1988 - 89 season which also went 23 games unbeaten in the Bundesliga.

Prolific Swiss star Derdiyok put the visitors ahead with a superb free kick which eluded Tim Wiese in the Bremen goal.

But German international goalkeeper Rene Adler blundered to enable Werder to level as he allowed a free kick to slip through his hands and Peruvian star Pizarro accepted the invitation to score from close range.

A fine strike from outside the area gave Kroos his ninth of the season and the league leaders might have added to their tally before in stoppage time Mertesacker headed the equalizer from a Marko Marin cross.

In other matches on Sunday, coach Felix Magath's return to reigning champions Wolfsburg saw new side Schalke slip to a 2-1 defeat to lose ground in the title race.

The third-placers took the lead through Kevin Kuranyi on the half-hour mark, but in the 71st minute Grafite headed the equalizer for Wolfsburg.

And it was Grafite who scored the winner six minutes from time.