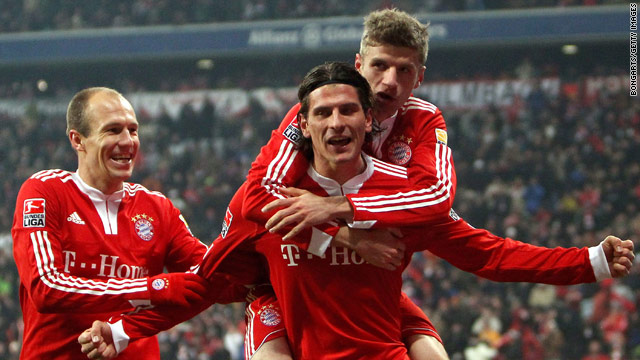 Unbeaten Leverkusen had defeated defending champions Wolfsburg 2-1 earlier in the day, but Bayern joined them on 48 points after 22 matches as Bayern came from behind with a victory that left the two teams separated by just one goal on for-and-against differential.

Third-placed Schalke will seek to reduce their six-point deficit on the leaders with victory at home to Cologne on Sunday.

Leverkusen took the lead three minutes after halftime at their BayArena ground as Stefan Reinartz pounced to score after veteran goalkeeper Andre Lenz spilled a free-kick by Toni Kroos.

The hapless 36-year-old handed Leverkusen a second goal 20 minutes later in unfortunate circumstances as home striker Eren Derdiyok's header from another Kroos set-piece hit the bar, rebounded onto Lenz's leg and into the net.

Wolfsburg striker Edin Dzeko pulled a goal back in the 79th minute but his side could not force an equalizer, and have now slumped to 14th place -- 23 points behind the leaders.

Bayern could already have been 2-0 down at that stage as Martin Demichelis and Mark Van Bommel cleared two shots off the line by Sven Bender.

Van Bommel leveled in the 21st minute as the Dutch midfielder beat Dortmund goalkeeper Marc Ziegler from 20 yards, then compatriot Arjen Robben made it 2-1 five minutes after halftime when he was set up by France playmaker Franck Ribery, making his first start this year following injury problems.

Ribery was again the provider as striker Mario Gomez sealed Bayern's ninth successive league victory in the 65th minute, cutting in from the left to beat Ziegler on the angle.

Hamburg went three points clear of Dortmund in fourth place with a 3-1 win at Stuttgart as new signing Ruud Van Nistelrooy scored his first goals for the club.

The veteran Dutch striker came off the bench in the 65th minute with the score at 1-1 to make his second outing since arriving from Real Madrid, scoring two typically opportunist efforts in three minutes as Stuttgart boss Christian Gross suffered his first defeat since taking the job in December.

Sixth-placed Werder Bremen crushed third-bottom Hannover 5-1 away, scoring four times in the first half, while Bochum moved eight points clear of the bottom three with a 2-1 win at home to mid-table Hoffenheim.

Basement side Hertha Berlin came from behind to earn a 1-1 draw at home to eighth-placed Mainz, but are still four points behind second-bottom Nuremberg, who lost 2-1 at Borussia Moenchengladbach on Friday night.