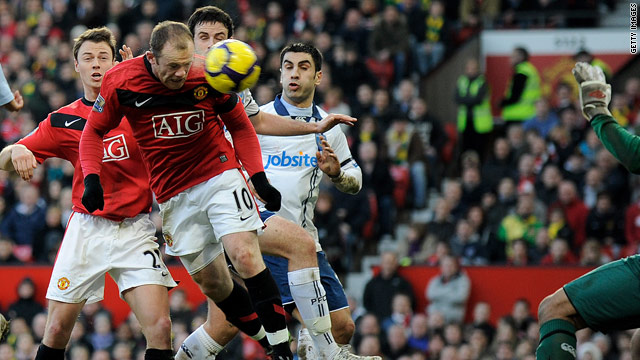 (CNN) -- Manchester United returned to the top of English Premier League with a 5-0 crushing of crisis club Portsmouth on Saturday, while Liverpool kept their Champions League bid on track with a 1-0 victory in the derby against Everton.

United went one point clear of Chelsea, who host third-placed Arsenal on Sunday, and Liverpool climbed into fourth despite having a man sent off.

Sixth-placed Manchester City could have joined Liverpool on 44 points but suffered a shock 2-1 defeat at Hull City, who moved out of the relegation zone.

Tottenham were unable to reclaim fourth place after being held 0-0 at home by fellow European hopefuls Aston Villa in the late match.

Portsmouth's season went from bad to worse at Old Trafford to end a week that saw Hong Kong-based businessman Balram Chainrai become the club's fourth owner in six months ahead of a winding-up hearing due to tax debts next Wednesday.

England striker Wayne Rooney put United ahead in the 40th minute with his 23rd league goal this season with a header from Darren Fletcher's cross, then Nani's close-range effort was deflected off Anthony Vanden Borre, who was credited with an own-goal, onto goalkeeper David James and into the net just before halftime.

It was 3-0 after 59 minutes as Portsmouth's Richard Hughes deflected a shot by Michael Carrick past James, then United striker Dimitar Berbatov fired in a low effort three minutes later.

The visitors then conceded a third own-goal in the 69th minute as Mark Wilson diverted Patrice Evra's cross into his own net to leave Portsmouth six points adrift of second-bottom Wolverhampton Wanderers, who play Midlands rivals Birmingham on Sunday.

Liverpool played for 55 minutes with 10 men against Everton after Greek defender Sotirios Kyrgiakos was sent off for a two-footed tackle on Marouane Fellaini, but claimed a vital home victory thanks to Dirk Kuyt's 50th goal for the Merseyside club.

The Dutch striker headed home Steven Gerrard's corner from close range in the 55th minute, and Everton struggled to break down their rivals' determined defense before also being reduced to 10 men when South Africa midfielder Steven Pienaar received his second booking in time added on.

Manchester City welcomed back England defender Wayne Bridge for his first outing in two months following injury -- and also since tabloid revelations which on Friday saw Chelsea's John Terry stripped of the national captaincy due to an alleged affair he had with his ex-teammate's former partner.

But it was Hull, who drew 1-1 with Chelsea on Tuesday, who took the lead in the 31st minute when Jozy Altidore scored his first league goal.

The United States striker, whose relatives were affected by the Haiti earthquake, curled in a fine shot after a layoff by fellow frontman Jan Vennegoor of Hesselink, whose fellow Dutchman George Boateng made it 2-0 nine minutes after halftime with a 25-yard volley from half-cleared corner.

Roberto Mancini's City pulled one back five minutes when Emmanuel Adebayor scored from close range after a corner by Stephen Ireland, but the visitors could not equalize despite bringing on new signing Patrick Vieira for his debut.

Tottenham could not find a way past Aston Villa's veteran American goalkeeper Brad Friedel, who pulled off a string of fine saves.

The hosts appealed in vain for a late penalty when midweek hat-trick hero Jermain Defoe was brought down by Villa midfielder Stiliyan Petrov, then his strike partner Peter Crouch missed with a back-heeled attempt from close range in time added on.

Fulham consolidated 10th place with a 0-0 draw at Bolton, who were left a point above the relegation zone after having a late header by captain Kevin Davies ruled out for a push on Brede Hangeland.

Stoke leapfrogged Blackburn into 11th place with a crushing 3-0 win over the visitors in manager Tony Pulis's 300th match in charge of the club.

Goals from full-back Danny Higginbotham and striker Mamady Sidibe made it 2-0 at halftime, then Blackburn defender Christopher Samba was sent off for a second yellow card before Matthew Etherington wrapped up victory on 67 minutes.

The match was marred by the news that a man, reportedly a Blackburn fan, was taken to hospital in a critical condition with a head injury after being found unconscious at the start of the second half. Police are investigating the matter.

Sunderland remained 13th after coming from behind to draw 1-1 with Wigan, who led through Mohamed Diame before Kenywne Jones headed home on 64 to give manager Steve Bruce a point against his former club.

Sunderland, however, have not won in 11 games while Wigan -- knocked out of the FA Cup by fourth division Notts County in midweek -- are just two points above the drop zone.

Burnley moved out of the bottom three with a 2-1 win at home to fellow strugglers West Ham to give manager Brian Laws his first victory since taking charge and the club's first in 13 league outings.